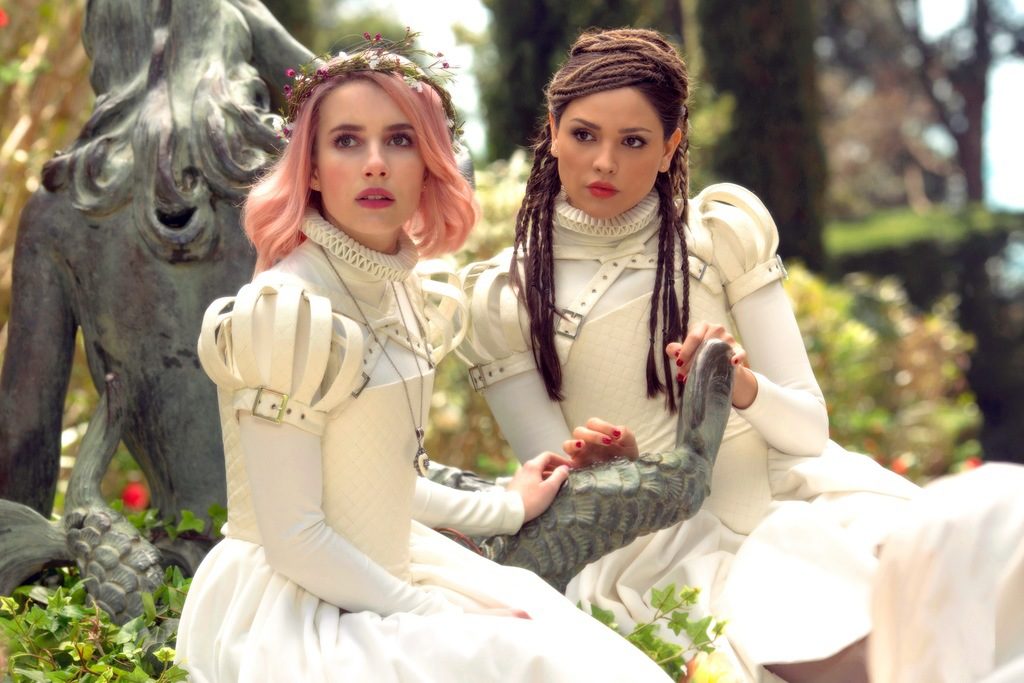 If you were fortunate enough to catch Alice Waddington’s short film, Disco Inferno, there is a high probability that the film’s overall production design left a positive impression, as it was easily the highlight of the black-and-white sacrificial ritual themed film.

If it left you curious as to what a larger-scale film production helmed by Waddington would look like, then Paradise Hills is here to quell that curiosity. And, once again, the production design is the highlight and is just as impressive, if not more so, than the last time around.

Working from a screenplay by Brian DeLeeuw and Nacho Vigalondo (based on an original story by the director and Sofía Cuenca), Waddington’s feature-length directorial debut centers around a finishing school of sorts that is run by The Duchess (Milla Jovovich) for “reluctant” young women. It’s idyllic in its presentation yet stained with a suspicious, nefarious streak. 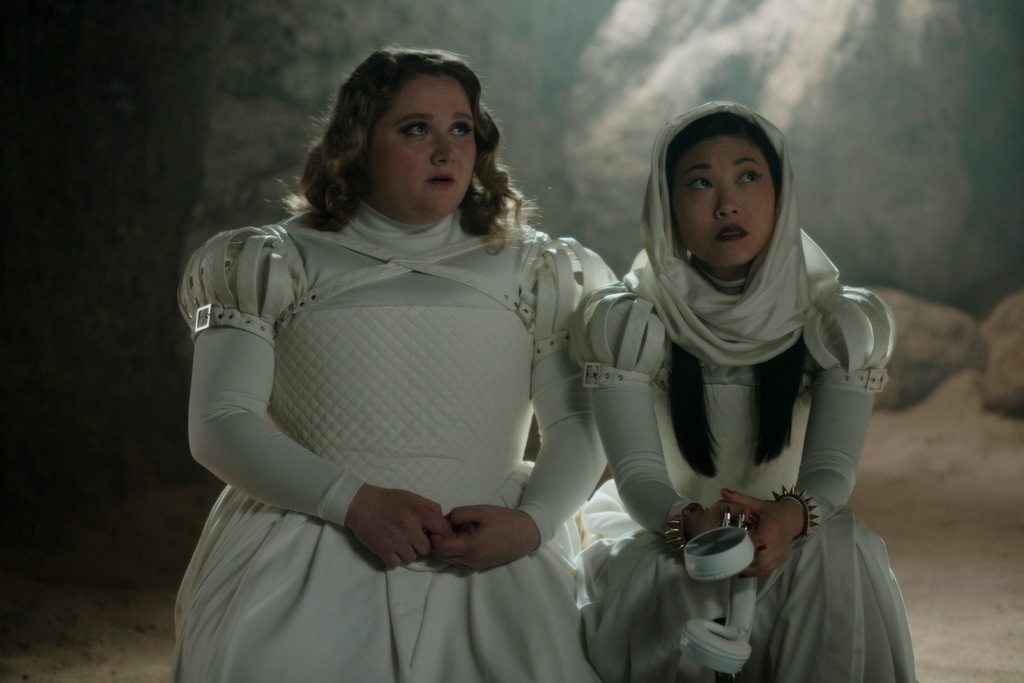 Every woman attending (most against their wishes) is being molded into an image of someone else’s choosing, or at least that’s the overall aim. What, on the surface, appears to be a resort that pampers headstrong, independent women into submission is more of brainwashing center specifically tailored to each individual “client.”

Uma, played by Emma Roberts, is the central focus; she’s been unwillingly shipped away to the island complex with the intent of softening her combativeness while also trying to get her to reconsider a recent marriage proposal – one that she sees as revolting but her mother views as advantageous. During her stay she spends much of her time with three other women – Amarna, Chloe and Yu (played by Eiza González, Danielle Macdonald and Awkwafina) – trying to figure out exactly what is going on and, more importantly, how they can all escape to live their lives in the ways that they wish.

It’s an interesting concept, for sure. Unfortunately, the ways in which it is explored fall short, considering the potential of the film’s premise. Too much time is spent simply wading around in the uncertainty of the complex’s mysterious practices and results. While this sustained build-up teases a potential revelation that will shock and astound, the actual moment of truth comes across as more of a rushed explanation that is squeezed in before the clock runs out. 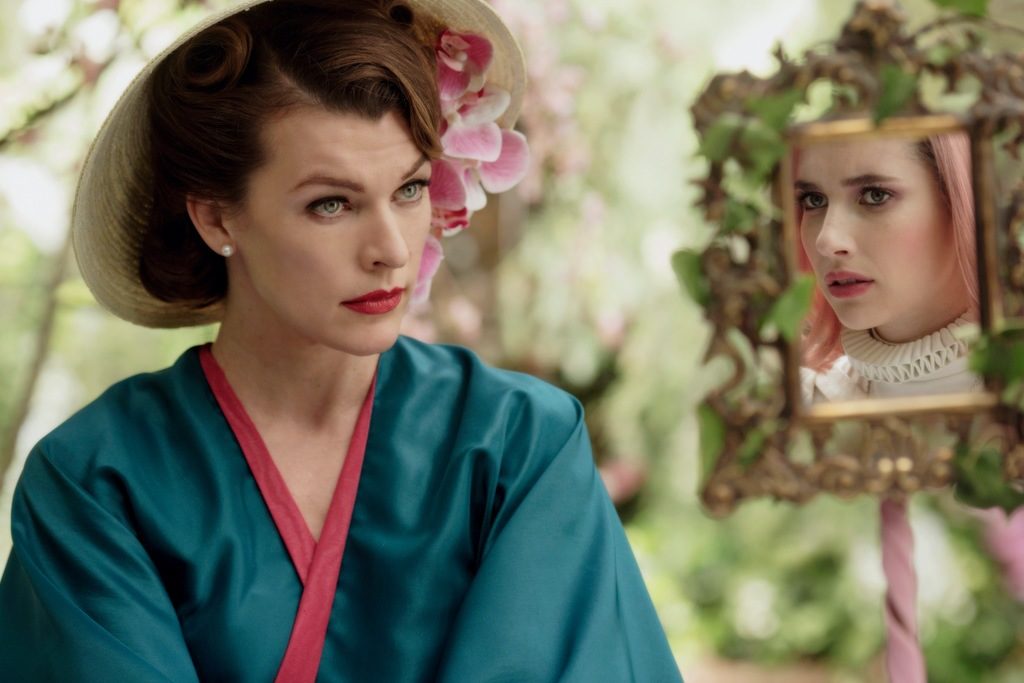 The script ultimately fails on two fronts. First, the extended build-up and the characters who inhabit this space lack a certain level of complexity, undermining any attempt at a profound, thematic statement. The lack of character development with regards to the supporting cast reduces them to nothing more than collateral damage when the time is right.

And second, when the time comes for the dramatic reveal – the moment where nefarious aspects are illuminated and the scope becomes more encompassing, it is presented in a short burst, like an afterthought. Further complicating things, preceding character motivations are nearly non-existent as alliances are forged out of thin air. Ultimately, there is a bridge missing between the build-up and the finale; the structure seems barely even thought of, let alone planned and constructed.

The production design, however, is immaculate. The amount of thought and consideration put into each facet of the film’s overall aesthetic are genuinely impressive. The architecture and furnishings. The costuming. The greenery, blossoms and bouquets. All of it so pristine and vividly colorful. 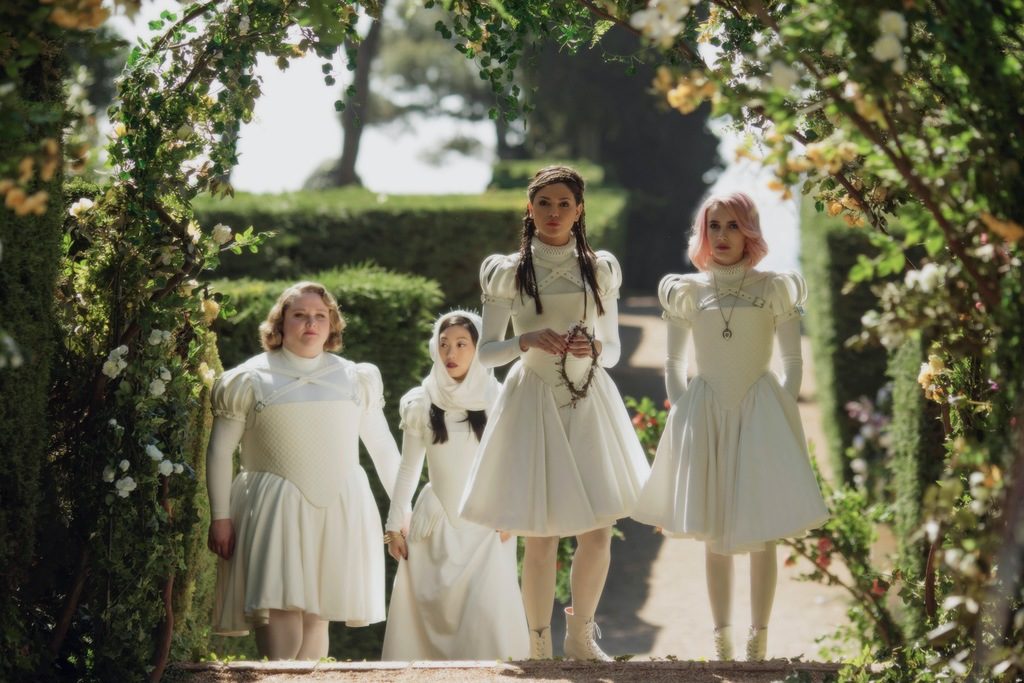 It’s futuristic sci-fi meets Old World with the complex set in what appears to be the ruins of a massive architectural structure, reclaimed and repurposed with advanced technology and modern conveniences. The location alludes to a dystopian future although not the likes of which audiences have come to expect in films past.

This is a lush, verdant dystopia – one with paths framed by bright, bold flowers and greenery. This isn’t the dark and barren apocalyptic landscapes of previous films because it is situated on the other side of society, the side of the obscenely rich wherein “dystopia” is merely a matter of perspective.

With all the care and forethought evident in the film’s setting and surroundings, the lackluster script stands out even more as the hamstringing culprit. If only there was more attention to detail in regards to the screenplay, Paradise Hills could have been something special. Regardless, it is still a worthwhile work that is positioned at the outset of a promising career.