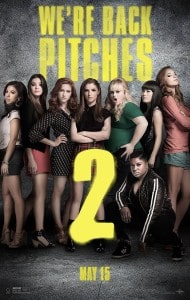 You don’t need to have seen the first Pitch Perfect film to appreciate Pitch Perfect 2, which easily stands alone as a great comedy that appeals to a broad audience. Elizabeth Banks’ feature-length directorial debut is a serviceable companion to the franchise’s 2012 original, bringing back the outstanding musical numbers (which were injected with plenty of humor) that made the first one so appealing.

Members of the all-girl a capella group Barden Bellas, many now graduating seniors, have won several national championships but, due to an embarrassing incident, must save the group from extinction. For the most part, this film is fairly enjoyable, save one major issue I had with the character of Fat Amy (Rebel Wilson), an at-times airhead who dislikes exercise but also has a strong sense of self.

In the original, she even explains why she calls herself Fat Amy (so that “twig b*tches don’t do it behind her back”), and she exudes loads confidence. With the sequel taking place three years later – after Amy theoretically would have had time to befriend the aforementioned twig b*tches – the filmmakers had an opportunity to develop Wilson’s character further, or even offer more of a backstory, but instead piled on the fat jokes, primarily physical-comedy gags, many of which (including the film’s major plot point, in fact) implied that Amy is disgusting because she is heavyset. There was also an inadvertent, embarrassing on-stage incident in the first film, but it was suffered by a thin, pretty girl and was not grounds for the group’s banishment.

Without knowing how much input Ms. Wilson (who holds a law degree from a prestigious Australian law school and was a Rotary International youth ambassador) had in creating the jokes, if any, it’s difficult to know whether I should feel offended or not. The comedienne may actually have written the gags herself. But I would really have loved to see this character more in command of her screen time, delivering the delicious burns and biting lines that she does so well, rather than recycling the it’s-funny-because-she’s-fat clumsiness bits that appeals to the lowest common denominator. 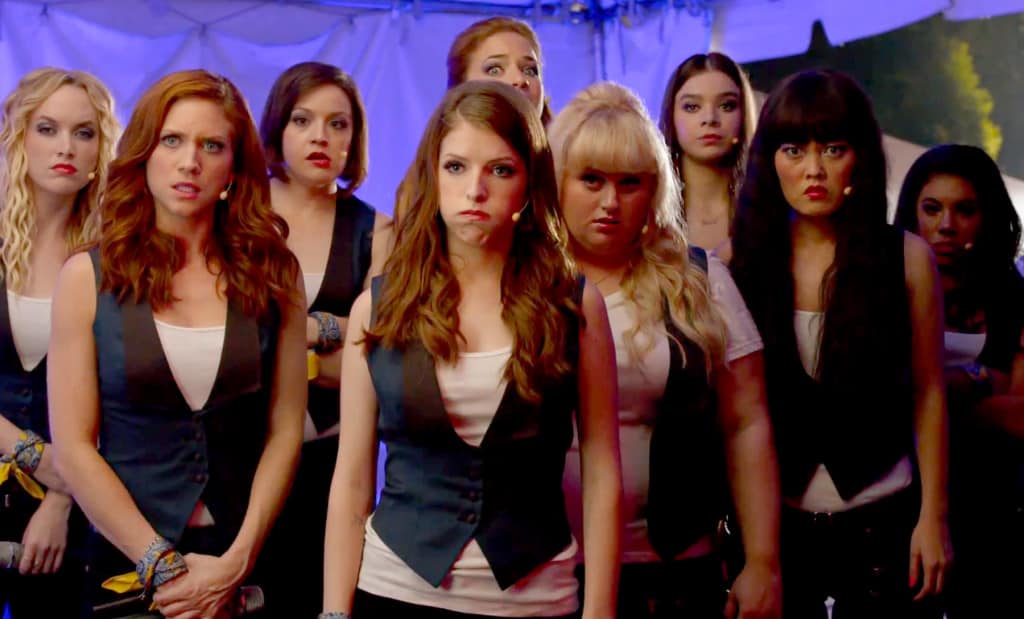 With enjoyable banter between Banks and John Michael Higgins as ridiculous podcast hosts and featuring solid cameos by Keegan-Michael Key, Katey Sagal and some Green Bay Packers (just to name a few), the supporting characters are hella entertaining. They outshine almost all of the core cast, including Bella newcomer Emily (played by Hailee Steinfeld, the spitfire from True Grit) and even our heroine Beca (Anna Kendrick).

Sure, this is an easy popcorn pic for fun movie night with friends, but don’t expect a deep connection with any of the characters; in fact, for a movie called Pitch Perfect, this one is a bit tone deaf.

Without giving away the plot, there’s a major theme in this film about originality, which makes little sense considering it’s the covered songs that make these films (and their fictional glee groups) so successful. Moreover, it’s a modern rendition of a few classic songs (starring Snoop Dogg as himself) that gives Beca a big break, and when an original song is “accidentally” sung, the blunder is touted as a cardinal sin of a capella. Hell, this is a even sequel we’re talking about here.

Yes, the singers give their fresh take on the established tradition of a capella, but – let’s be honest – it’s the juxtaposition of their musical interpretation together with what our ears expect to hear that is so pleasing to our senses. That’s why it’s so frustratingly confusing when we’re presented with a last-minute sub-plot about the Bellas needing to find “their sound,” as if it were lost or even necessary, that just appears to be tacked on for added drama.

Pitch Perfect 2’s predecessor told a love story that climaxed with a romantic gesture in the form of a power ballad that was made to feel fresh and relevant to its context. With this installment, I was left feeling unsatisfied and missing the heart ‘n’ soul that the original had, despite its cheesiness.

For some good chuckles, check this one out; it’s a great feature debut by Banks and is best seen in the theater to get the full effect. But if you can only afford to go to the movies once this week, go see Mad Max: Fury Road for an extraordinary film experience then rent this one when it comes out on Blu-ray.