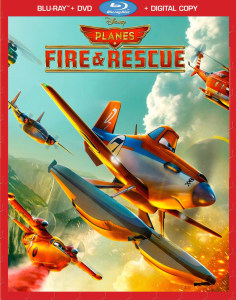 Dusty has become somewhat of a sports celebrity and has embraced a career in racing. Unfortunately, due to a mishap, Dusty ends up temporarily joining a group of firefighting aircraft and their support vehicles, learning the ropes of how to fight wildfires from veteran firefighter Blade (Ed Harris), at a place called “Piston Peak.”

Planes was a great underdog story, but the second installment aims to show that true heroism doesn’t come from just winning races but rather putting one’s life on the line for others – a noble plot framework. In fact, the special features on the Blu-ray show how the creators went to great lengths to make sure the firefighting techniques shown in the film were true to life, including consulting with real-life firefighting pilots.

Like most Disney releases, the DVD/Blu-ray/digital combo is packed with bonus features, including two animated shorts, a featurette on real-life forest firefighting, a music video, two deleted scenes and a few other fun additions.

However, this sequel of a spinoff (off of Pixar’s Cars franchise) is considerably lacking when compared to two other recent releases from Disney, Frozen and Wreck-It Ralph to be exact. With Fire & Rescue, there is simply no comparison to this pair of winners. From the quality of the animation to the script, it seems like this one would have been better suited for the straight-to-video market, as the first was originally intended. It’s not a bad film per se, there just isn’t much originality or greatness to it.

Even with a decently packaged Blu-ray, it’s hard to recommend this film unless you’ve seen the first Planes and you’re just itching for more. Young children will probably love it simply because it features talking machinery, but unlike many other Disney animated films, there isn’t much in this one for the adults.