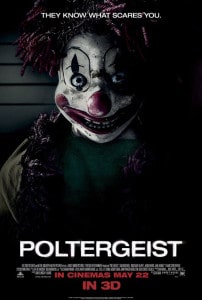 The restless souls of 2015’s version of Poltergeist have upgraded their method of communication to HDTV, but the film as a whole does little to repackage or freshen-up the 1982 original. This update is a half-hearted and half-baked retread that coasts on straight mimicry rather than tweaking the now well-worn formula for supernatural intrusions into suburbia.

Those familiar with the seminal chiller directed by Tobe Hooper and produced by Steven Spielberg will immediately recognize the iconography on display here: the TV and its static, the clown, the tree, the closet, and so on. The bumps in the night and paranormal happenings quickly become a checklist to get through. The bland, straightforward production will even allow newcomers to remain several steps ahead.

It all starts, as these things usually do, with a family moving into a new home. Patriarch Eric Bowen (Sam Rockwell) has lost his job, and he and his out-of-work writer wife Amy (Rosemarie DeWitt) are struggling to support kids Kendra (Saxon Sharbino), Griffin (Kyle Catlett), and Maddy (Kennedi Clements). The parents are both unemployed, have several credit cards maxed out, and can barely afford takeout pizza, but somehow were approved for a spacious home in a planned community. I guess they’ll sell a home built on an old cemetery to anyone.

Though the haunting is extremely familiar, to its credit Poltergeist doesn’t waste a lot of time getting to the eeriness. The Bowen’s learn of their housing development’s history just as the tree attacks Griffin and Maddy is swallowed up by her closet and led into purgatory. But after, of course, Maddy’s obligatory delivery of the line, “They’re here.” On the one hand, we’re spared belabored exposition; on the other, we’re left with the monotony of balls rolling on the floor by themselves and several other objects showing signs of life. 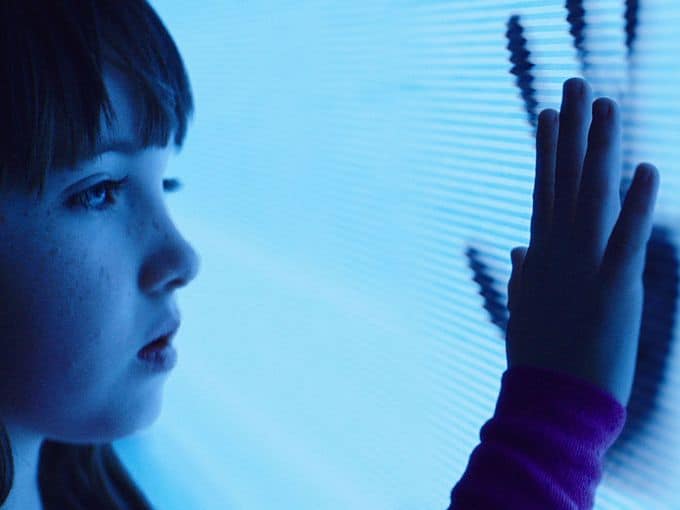 What could desperately use some more spirit are the script from David Lindsay-Abaire and the direction of Gil Kenan. The screenplay simply uses the original film as a hard outline and fills in some gaps to accommodate for iPhones, Skype, and reality TV. Naturally, Carrigan Burke (Jared Harris), the expert brought in to help the Bowens retrieve Maddy from the unruly apparitions, is the host of a Ghost Hunters-esque program of which Kendra’s a fan. It’s very convenient that Carrigan was once romantically involved with Dr. Powell (Jane Adams), the paranormal investigator the Bowens hire initially. In turn, it’s convenient that Dr. Powell works at the university where Amy was once employed.

The whole film is built on convenience and ease, settling into a leisurely tempo. It’s quite amazing how laid-back everyone seems to be considering there’s a six-year-old being held hostage by entities from beyond. While the cast appears game early on with everyone settling into their familial roles and playing off each other well, by the middle of the second act they’re all reduced to looks showing varied levels of muted concern.

Similarly, the ghost story runs out of steam with Kenan letting the material languish instead of building to a feverish finale. Things play out simply as they need to in order to get the requisite result, and characters act accordingly. There’s no concern for what may or may not happen because it’s all clearly pre-determined. Griffin’s overcoming of paralyzing fear nearly works, but in the end it’s just another narrative necessity.

With nothing nerve-rattling or visually interesting – the effects are either cartoony or uninspired or both, several questions started to seep into my mind during the lackluster experience. How did this family afford this house again? Why does everyone continue with the in-jokes and one-liners after Maddy goes missing? Is this the only house in the doomed development to have ghoulish issues? Do none of the neighbors ever see or hear anything – including a screaming kid being tossed around atop a huge tree?

The answers to these questions don’t really matter; I just needed something to occupy my mind. Apparently, I was just as bored with the featureless material as the filmmakers appear to be.