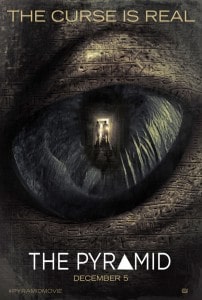 The Pyramid is a monument to stupidity. Ominous opening text tells us a documentary crew went to Cairo in 2013 to film a team of archaeologists and, “this is what happened to them.” But what starts as strictly found footage hokum with the establishing of a cameraman, wearable head cams, and a robotic rover, shifts to unaccounted-for sources, including jarring God’s eye view shots. As horror movie approaches go, positing as found footage only to ditch the style for more conventional chills is unadvisable and undermines any urgency that had been established. The Pyramid never justifies its tactics and, worse, each method employed is handled horribly.

As unrest grips the streets of Cairo, intrepid reporter Sunni (Christa Nicola) and her cameraman Fitzie (James Buckely), head to the Egyptian desert to document an exceptional find. Old-school archeologist Holden (Denis O’Hare), his more tech-reliant daughter Nora (Ashley Hinshaw), and their team are about to breach the unique 3-sided pyramid they discovered buried in the sand. With the dig shut down over safety concerns in the region, the father/daughter team and fellow explorer Zahir (Amir Kamyab) convince their armed escort to allow them a quick look inside the structure. With Sunni and Fitzie in tow, the crew descends into the unknown, which of course is filled with all sorts of danger, like crumbling floors, labyrinthine dark corridors, feral packs of flesh-eating cats, and an ancient evil that lurks in the shadows.

The setup is basic and the doomed group starts getting picked off soon enough, but screenwriters Daniel Meersand and Nick Simon and director Grégory Levasseur feel the need to over-explain everything. Comically stilted conversations in the early going are masked as a reporter’s banter with her subjects, but are really just mind-numbing exposition dumps for the audience. We get lectures on everything from the noxious gases that build up in sealed, centuries-old structures – which could be interesting – to the definition of the word “apex” – which is kind of insulting. School continues inside the pyramid, with Holden and Nora deciphering hieroglyphics and spelling out relevant ancient Egyptian lore. It also doesn’t help that the acting is universally terrible, making the routine all the more unbearable.

Mechanical delivery extends to thrills as well, with a handful of jump scares scattered throughout the film as the major source of would-be terror. Levasseur cut his teeth with partner Alexandre Aja – a producer here – by co-scripting The Hills Have Eyes and Maniac, among others, but his first directorial feature shows no understanding of the genre basics. There are several fits and starts, with chases in the dark, feral cat attacks, crawls through confined spaces, and a monster reveal awkwardly intermixed with banal plotting and dialogue.

The iconic “I’m so scared right now” monologue in the Blair Witch Project works thanks to the way the shot is framed, the performance, and the palpable emotion and meaning attached by the character. In The Pyramid, a rigid, middle-aged scientist addresses the camera directly in medium shot; blandly leaving a record of the events should anyone find the footage. Not effective in the slightest, but par for the course in this completely inert film.

Like the almost-as-bad 2014 found footage non-thriller As Above, So Below, which was filmed in the creepy catacombs beneath Paris, The Pyramid takes a setting containing copious history and infinite possibilities and reduces it to the lowest common denominator. Destined to be quickly forgotten in the annals of horror history, The Pyramid is a relic in its own time.