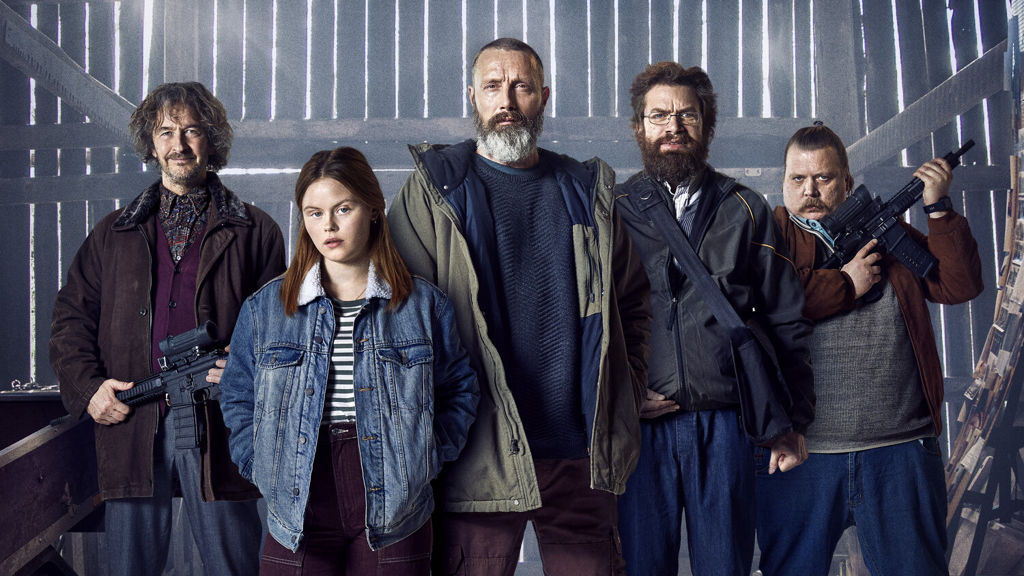 I like that I can’t think of a movie to which to compare Riders of Justice. The way writer/director Anders Thomas Jensen sets things up, it looks like we’re in for the Danish version of Taken, substituting badass Liam Neeson for badass Mads Mikkelsen. But then the jokes and kooky characters pile on, along with some serious attention given to mental health, and it becomes clear that this is not your average action-revenge flick.

When Markus’ (Mikkelsen) wife dies in a subway explosion, he is forced to leave active duty in the service and take care of his teenage daughter, Mathilde (Andrea Heick Gadeberg), at home. Mathilde suffers from existential dread and finds it well-nigh impossible to process her mother’s death because her tough-skinned, atheist, and all-too-stoic father refuses to talk about it.

Otto (Nikolaj Lie Kaas), one of the train passengers and a professional statistician, deduces that the explosion was a bomb planted by the criminal Riders of Justice gang. After he informs Markus, they put together the smartest, deadliest, and weirdest vengeance crew in the history of Denmark.

It’s fun to watch the crew comically bicker like children all while plotting to kill people. Only Markus is capable of maintaining focus, and when someone falls out of line, he resorts to punching them in the face. The film is lined with comedic bits from beginning to end, like Lennart (Lars Brygmann) continuously complimenting Markus’ barn (the team’s meeting place) or Emmenthaler’s (Nicolas Bro) psychotic need to work on top-of-the-line computer monitors. But the biggest laughs are tied to the deep psychological turmoil of the characters, making Riders of Justice one of the darkest comedies you will ever see.

Every member of the bunch has concerning mental issues. When Emmenthaler gets upset, he turns his back, folds his arms, hunches over, and shudders. Otto then consoles him by rubbing his back and speaking to him gently; you can tell Otto has done this many times before.

Although Jensen makes fun out of his characters’ mental illnesses and trauma, he also creates genuine heartfelt scenes out of them while stressing camaraderie and the importance of family. At the heart of the story is a damaged father-daughter relationship in need of a mend. Jensen uniquely encompasses his story with ideas of chance versus meaning and the butterfly-effect metaphor.

Coming off another great performance in 2020’s Another Round, Mikkelsen looks to be on a roll. With Markus, he buries his emotions like he buries his foes, and it’s visible in every moment in his demeanor. We expect quality from Mikkelsen, but the rest of the cast, who we’re less familiar with, are also superb, with their versatility paying off in tender moments and punchlines.

For those of you who wanted to see Mikkelsen kicking ass and taking names (guilty), don’t worry, Riders of Justice lives up to the trailer’s promise. When Markus takes up arms against his enemies, he’s like a Navy SEAL facing off against regular citizens, picking off his prey one by -one. No remorse, no hesitation, no flinching, not even a blink – badass Mikkelsen doesn’t disappoint.