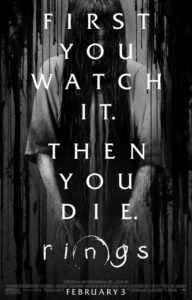 Unoriginality is a common criticism of horror sequels. It’s easy to line up another string of teenagers for a masked killer to slice through or move a new family into a haunted house. Years-later sequel Rings, then, earns at least a little credit for attempting to tweak formula and develop a new mythology. It just doesn’t do either of those things, or anything, well.

After two brutally written prologues – one designed to recap the rules of a cursed videotape and one that sets in motion a new sequence of events – the film settles into endless explaining mode. If you never knew or forgot in the 15 years since Gore Verbinski’s The Ring: a young girl named Samara was thrown down a well and her malevolent spirit haunts an old videocassette filled with gonzo black and white images. Whomever watches it dies seven days later, unless they make a copy and pass it on to doom another poor soul.

New potential victims this time around include Julia (Matilda Lutz) and her boyfriend Holt (Alex Roe), who heads off to college. When Holt fails to show up for Skype sessions or return calls, Julia rushes to his campus to investigate. There, she meets a biology professor (Johnny Galecki) conducting an experiment by having a string of students, including Holt, watch the tape. Theoretically, as long as the cycle continues no one will die. After Julia watches it and sees different images, she and Holt dig deeper into Samara’s past and cross paths with a blind cemetery caretaker (Vincent D’Onofrio) who provides even more boring backstory. We get several lackluster plots in one.

All of the exposition leaves no time for scares and isn’t conducive to establishing a sense of danger or dread. The reason the original (which was a remake of a Japanese film) worked despite a dopey premise was because it teemed with atmosphere. There’s none of that ambience in Rings. The scariest moments are of the cheap variety, when a dog barks unexpectedly and there’s a quick cut to an umbrella opening. When an umbrella is scarier than your monster, it’s an issue.

Director F. Javier Gutiérrez composes a few interesting shots, including extreme close-ups of Julia’s face as something goes on the background. The interesting-looking depth of field never leads to anything actually interesting occurring, however. Other attempts at mood either try way too hard or way too little. Falling utility poles, rainy cemeteries, dank basements, and using flashlights/lighters to navigate dark spaces fail to inspire. 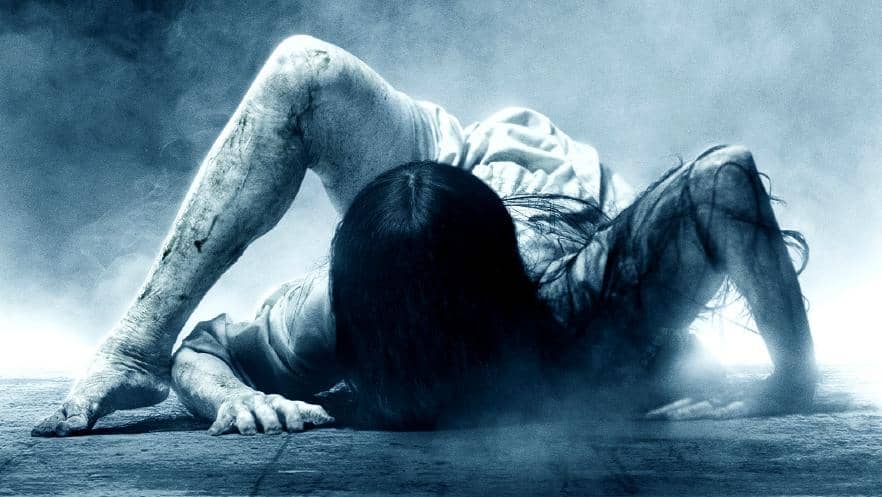 The characters’ lack of intelligence is also hard to overlook. The guy from the (first) prologue is on a plane at the exact moment his seven-day timer runs out. Is it really smart to trap yourself at 30,000 feet in that situation? And to endanger hundreds of others? Another person’s time is set to run out in 12 hours, and they just go to sleep. Another waits until literally the last minute to frantically make a copy and try to force someone else to watch it.

The cast is uniformly flat and monotone, adding to the overall insipidness. The one exception is D’Onofrio as the blind sage, delivering his banal dialogue with some kind of fervent inflection. Though it’s a bit distracting that his sunglasses are way too small for his head. I guess nobody told him.

Where everything ultimately leads is wholly unsatisfying, and despite the movie holding our hands every step of the way, there’s no basis for what happens in the end and no reason for us to care.

The conceit of the cursed tape feels way past date, and though the magic can somehow adjust to technological updates – moving from a VCR to .WAV files, Rings can’t overcome an extremely limiting premise no matter how much it tries to expound on it. And the more it tries to explain the evil, the less frightening it becomes. That’s just Horror 101.

It’s time to bury this franchise and hope it never returns from the depths to haunt us with mediocrity.