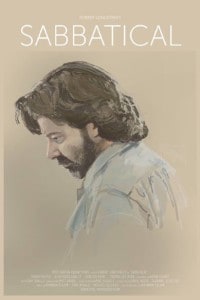 One might assume that a film revolving around a middle-aged man returning to his hometown in order to care for his ailing mother, recovering from a recent stroke, to be an emotionally-charged affair; complete with numerous breakdowns, tear-stained faces bursting with fear and uncertainty or passionate eruptions brought on by the overwhelming frustrations of the relentless responsibilities characteristic of care-taking. Writer/director Brandon Colvin, however, depicts that narrative in a much different style in his sophomore effort, Sabbatical, opting instead to reduce the emotional volume to near silent levels as the characters attempt to suppress confronting their feelings in a constant struggle to keep the ever-mounting emotions deep down inside.

Sabbatical‘s narrative essentially follows the path described in the previous paragraph with Ben (Robert Longstreet) taking a sabbatical from work in order to care for his mother, Elizabeth (Rebecca Koon), and hopefully finish work on his latest book. In between his episodes of careless yard work, incompetent TV repair and trying to help his younger brother, Dylan (Kentucker Audley), Ben finds himself reacquainted with old friends (Thomas Jay Ryan) and former lovers (Rhoda Griffis) which slowly divert his attention away from the main priority of his extended stay.

Economical with its dialogue, the film prefers to communicate through body language and uneasy silences which are handled ably by Longstreet. Tasked with the role of a near-silent man shuffling through various shades of dejection, Longstreet easily embodies the sadness of a man adrift in an existential crisis, of a sort. He lets the sorrow of his character permeate throughout the duration of scenes of the mundane and uneventful.

The pace at which Sabbatical travels in could be seen as a detriment to some; a legitimate criticism if one isn’t in the right mood for a languid chronology of events while the character’s emotional states and thought processes remain shrouded in a thick fog of pent-up feelings and undiscussed pasts. Luckily, Colvin and Aaron Granat’s cinematography (along with Longstreet’s subdued performance) is able to offset many of these aforementioned qualms.

A mosaic of static shots (rarely a camera movement), Granat’s presentation is a skillful mixture of hyper-symmetrical framing and penetrating, close-up portraiture to the edge of uncomfortable. Even with the film’s intimate appearance there seems to be a distance between, not only the characters themselves but also, the film and the viewer. There is a coldness to the proceedings, everything seems detached as if a gulf exists between everyone involved. Inexplicably, however, you can sense a certain tenderness in these meticulously-crafted frames; perhaps, more accurately, a remote longing for comforting tenderness.

The up-close framing of certain scenes, with their unconventional focal points, suggest that there is a hidden film playing out in the periphery. Perhaps, an unspoken, unseen film of context is taking place on the exterior of the screen. Facial expressions and interactions that would otherwise clear up and provide reasoning as to the current moods of the characters.

Even though Colvin decides to unfurl his domestic drama with a measured pace, coupled with muted demeanors, Sabbatical is nonetheless effective, electing to slowly drain the emotions from its viewers instead of the heavy-hitting combos they might be more accustomed to with this type of plot. The exceedingly meticulous and restrained film needles the sentiments out over its relatively short run-time as Colvin deliberately builds to a somber confrontation. The bottled-up emotional torment, long repressed, buried deep with Ben finally (if only for a moment) graces his otherwise impassive face. A tiny eruption of emotion in a film that extensively endeavors to harbor those feelings at bay.

SABBATICAL – A Feature Film by Brandon Colvin – Trailer from Tony Oswald on Vimeo.