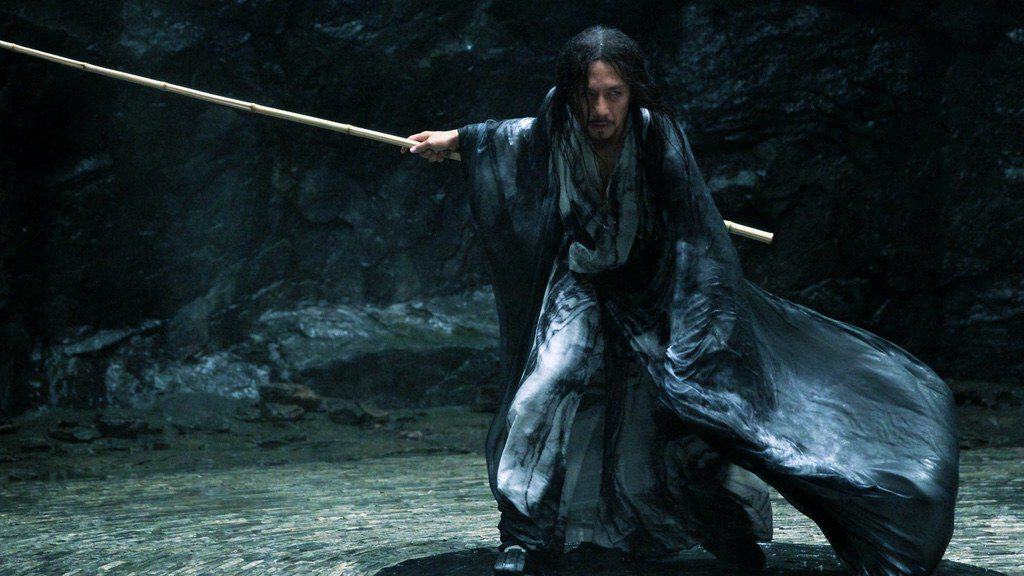 With just a glimpse at the screen, you’ll notice Shadow‘s stunning monochromatic palette. If you are familiar with Yimou Zhang’s work (Hero, House of Flying Daggers, Raise the Red Lantern), then the visual feast before your eyes will come as no surprise. The difference this time around is that Zhang strictly utilizes shades of grey, the stark opposite of his usual extravaganza of vibrant colors.

Zhang’s refusal to rely on computer technology to desaturate colors pays off immensely. The props, set decoration, costumes and makeup are all crafted with Chinese, black-and-white ink brush painting as its inspiration. Consequently, every frame is a marvel and Zhang’s artful duels are visual strokes of genius. 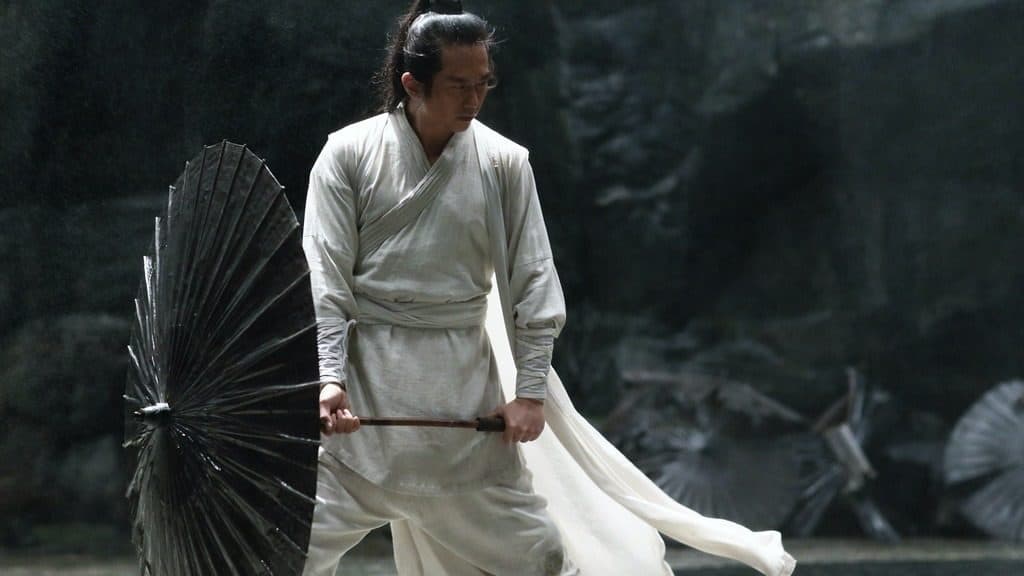 With the aid of cinematographer Xiaoding Zhao, frames are composed of ravishing Kurosawa-influenced symmetry. Exteriors are overwhelmed with gloom and heavy rain – an accentuation on the film’s central yin theme. In addition, the film’s title is symbolically rich; Shadow is an aspect of yin, a representation of deceitful characters, cynical plotting, and the nature of the film’s lead character, Jing Zhou (Chao Deng).

Zhou is a secret double of Pei Kingdom’s dying general, Commander Yu (also Deng), a secret unbeknownst to everyone but Yu’s wife, Madam (Xiao Ai). Born a commoner, Zhou lived in the shadow of the upper class, and now – as a close hand to King Pei (Kai Zheng) – he is still only a shadow to the real army general. Constantly scorned by both the arrogant king and the mad, scheming, cave dweller, Commander Yu, we’re centered on the triumph of Zhou rather than the film’s main plot.

Set in the third century AD, during China’s Three Kingdoms period, the Pei Kingdom is on the brink of war for the rule of the major city of Jing. Jing is occupied by an adversary, Ping (Wu Lei), and his undefeated father, General Yang (Jun Hu). Commander Yu wishes to take the city by defeating General Yang in a duel, but that outcome is too unlikely for Pei’s approval. While Pei rules the kingdom with an iron fist, Yu uses his shadow as a pawn in a conniving political chess game. 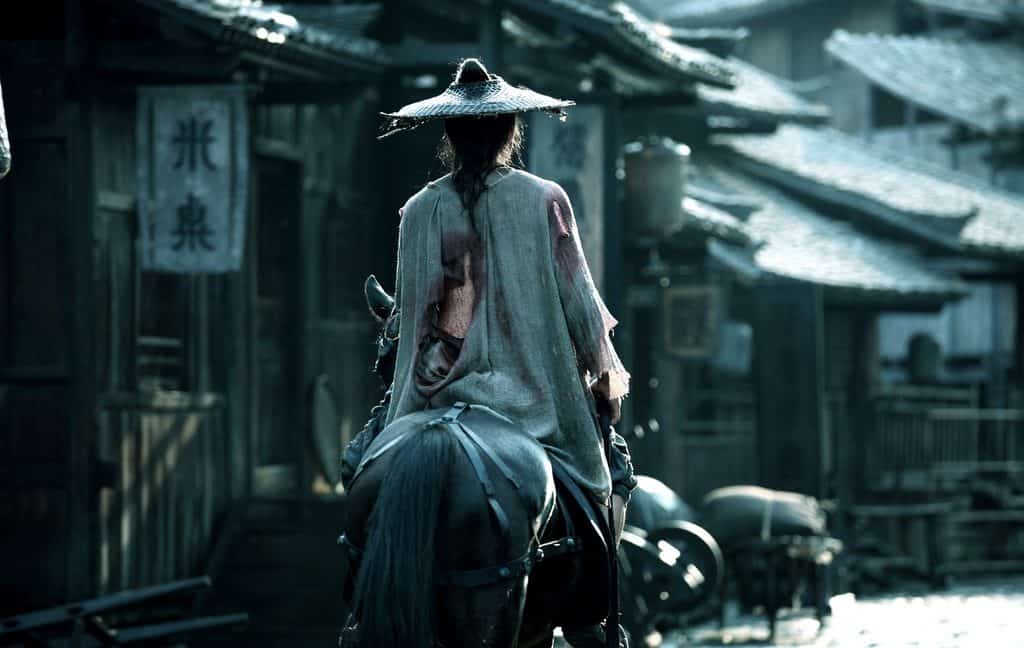 Shadow‘s grandiose, Shakespearean plotting is much less captivating than the film’s richness in eastern values, like the philosophical strategy on the impending battle at Jing, the recurring yin-yang theme and of course the martial arts.

Before all the drama unfolds, Yu’s wife, Madam, and Pei’s sister, Qing Ping (Xiaotong Guan), consult the ancient Chinese cleromancy text, the “I Ching.” They throw their tokens onto a yin-yang-designed surface to draw a reading that predicts a soon-to-come triumph. The oracle stresses the water element – a yin-dominant hexagram. Water plays a key role throughout the film.

Zhang and action director, Dee Dee, brilliantly express the film’s themes of yin and yang via artistically composed martial dance. In a single shot, we watch the slow-motion down-swing of a heavy glaive elegantly parried by a weaponized umbrella, beautifully exemplifying the defeat of masculine through the feminine yin. 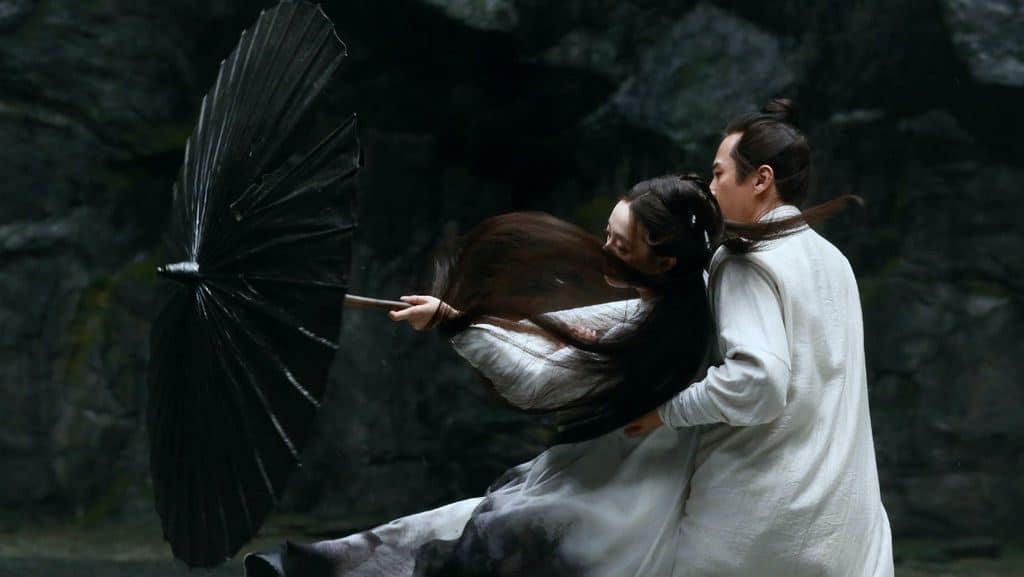 For a Zhang film, this is a real gorefest, a surprising choice as it only detracts from the elegance of the combat. Nevertheless, Zhang puts the ‘art’ in martial arts. Warriors leaning at impossible angles with outstretched limbs in the midst of infinite raindrops to the sound of an aggressive guzheng can only be found in a Yimou Zhang film.

Shadow may not have the anticipative story of Hero or the emotional complexity of Red Lantern, but its visuals are so impressive they can be enjoyed on mute with the subtitles turned off.