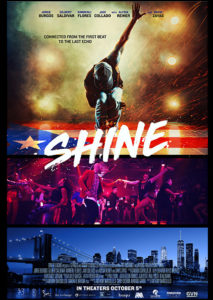 As Film Pulse’s (official?) dance-movie reviewer, I’ve both electively and reluctantly seen my fair share of them. I imagined Shine – a movie about Spanish Harlem and its mambo scene – might scratch the elusive itch for a decent dance film that has both a plausible plot and believable acting, each rivaling its spectacular steps. (While I’m on the topic, there are plenty of “shines” in Shine, which will certainly thrill all you fans of fancy footwork).

My expectations going in were low, however, because it’s a rare film crew that’s able to pull off a movie about dancing that isn’t laughably bad. You know the ones; we don’t watch them for the acting. But the exception with Shine, especially for this Floridian-turned-New-Yorker, was the prospect of seeing bachata babe Jorge “Ataca” Burgos and the legendary Griselle Ponce on the silver screen, in a movie about salsa dancing no less.

The film bursts out of the gates (we’re talking, like, less than 15 minutes in) with a heartfelt lesson about the importance of culture and family. This feels a little forced, as the audience is barely given an opportunity to “settle in,” get to know the characters and appreciate the unique feel of the bustling borough for themselves before being bombarded with a preachy message. Said sermon giver, however, is David Zayas (of Dexter fame), who doesn’t disappoint as a conguero named Ramon. My only complaint is his regrettably brief amount of screen time.

Ramon’s two sons, Junior and Ralphi, have grown up in a neighborhood dance studio under the tutelage of their father and presumably his band mates, including guitar player “Tio” Julio (Fania All-Stars alum Nelson González). A tragedy separates them, sending Ralphi (Burgos) off to London and ultimately breaking the brothers’ close bond.

There’s a nod to the famous dance-flick franchise when, in trying to figure out how to solve a financial problem, one of the neighborhood dancers reminds us that “this ‘aint no Step Up,” that there will be no prize money for a dance-off at the end. And yet there’s certainly a whiff of Step Up Revolution and its “dancers trying to save Ricky’s bar from from the evil real-estate developers” McGuffin.

Shine’s evil real-estate developer is the quite unnecessarily bitchy Linda Tanner (Alysia Reiner, Orange is the New Black), Ralphi’s boss who has made an enemy of Junior (Gilbert Saldivar, also of Dexter), leaving his brother to mediate the best that he can. Ralphi is also trying to win back the affections of ex-girlfriend Josie Fuentes (Kimberli Flores) – conveniently for Ralphi, still single after their seven-year separation.

While character development and plot progression are rushed, other elements drag on; for one, it’s a full hour into the film before we see some of Burgos’ signature bachata. The filmmakers make some other unfortunate editing choices. Montages feel too short, for one (a phrase I am fairly sure that I’ve never written before); we’re served up a sorely underdeveloped plot; and the final dance exhibition for the “community” shows a crowd consisting of (what appears to be limited to only) a small group of twenty- and thirty-somethings with professional-level dance skills themselves.

All that aside, director of choreography Andy Cruz delivers a knock-out demonstration of on-2/New York-style salsa, cha-cha-chá and bachata – aided by choreographers Ponce, Charlie Garcia and Osmar Peronnes; Antonio Doza-Williams is a scene stealer; and the soundtrack is spot on – my personal favorite being a well placed “Vivir Mi Vida” by native-neoyorquino Marc Anthony at the film’s climax.

The performances do not disappoint, with several high-profile dancers, such as the spintastic Magna Gopal, the smooth Ismael Otero and the always-exciting Delia Madera (although seen in mostly blink-and-you’ll miss ’em cameos) strutting their stuff. And I must mention the contributions of cinematographer Pedro Avila for the top-notch imagery from start to finish.

In spite of some unfortunate acting and a painfully predictable gentrification-versus-the-locals storyline, Shine is beautifully shot; packs quite a punch for its comparably small size; oozes Puerto-Rican pride; and, ultimately, does exactly what it set out to do, with the high-energy vibe somewhat making up for the roughness around its edges.