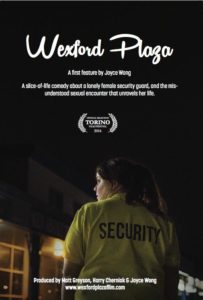 This is a repost of our review from Slamdance 2017. Wexford Plaza is playing in limited release now.

A diptych on the inner lives of supporting characters, each afforded the lead in their own half of the film, is how writer/director Joyce Wong decides to explore the ups and downs of the people that usually occupy the margins of a film in her debut, Wexford Plaza. A series of interactions, both intimate and social, taking place within the vacant spaces of a strip mall tilting towards dereliction, of well-meaning intentions unraveling the frayed strands of two lives to differing degrees.

The first half of the film follows Betty (Reid Asselstine), a young woman recently employed as a security guard at the aforementioned strip mall; an amberlight box in the middle of an empty parking lot is where she wilts while on the clock in between smoke breaks with co-workers and patrolling the perimeter of your Dollar Guys and Men About Town stores to ensure their safekeeping. She tries her best to fit in amongst her co-workers and the tenants, all of which are men of differing immaturity levels; one of which exhibits an approachable demeanor, seemingly generous with his time and attention which Betty intakes with a giddy, growing excitement.

That one man happens to be Danny (Darrel Gamotin), the bartender at one of the strip mall establishments that seems to only serve the security crew. Danny’s perspective is the focus of the back end of the film, rehashing earlier events – the interactions that occur through the course of Betty’s days – but this time from the viewpoint of Danny’s experience thus providing context to the proceedings. In essence, with Wexford Plaza, Joyce Wong is recounting two sides of the same story; their time away from the strip mall is presented in order to provide a deeper understanding of their respective actions while a smattering of those key moments in their burgeoning relationship play out in both parts, from both perspectives. 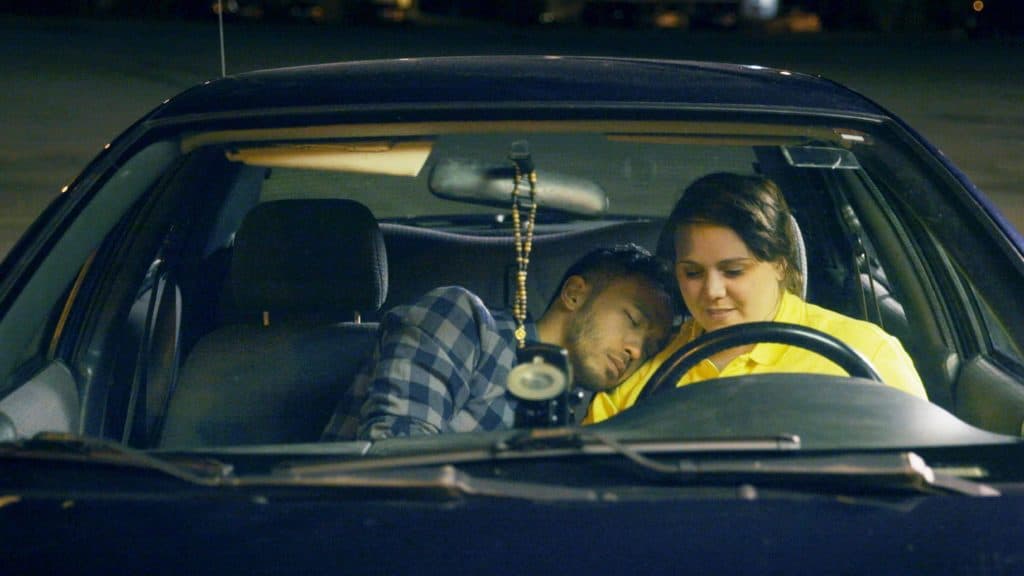 It is a decidedly interesting format in which to explore the effects of the seemingly-insignificant, how good intentions coupled with communication breakdowns can lead to interpersonal disasters, but it does simultaneously bare its own intrinsic disadvantages, in a sense. The first of which consists of essentially devoting all screen-time to the exploration of these few interactions; their effects and their aftermaths. With this in mind, those moments must be capable of holding the weight of the film’s runtime, to be interesting enough – or, in other words, complex/layered enough – in all facets (execution on a surface level and exploration therein). Secondly, representation of said events in a dueling point of view format will inevitably render portions of the film redundant. Couple that redundancy with a meager narrative and the result could be rather lackluster or disastrous; however, in Wexford Plaza’s case it’s just rather pedestrian.

The tandem performances delivered by Asselstine and Gamotin do well in maintaining a consistent level of empathy throughout. Both are able to bring a certain amount of affability and warmth to their characters that work well at encouraging engagement. Their portrayals along with Wong’s handling of the material, in terms of writing and directing, does occasionally reach impressive heights of emotional impact; specifically, the ending moments as the dust settles, so to say, as we learn about the disproportion of their respective outcomes.