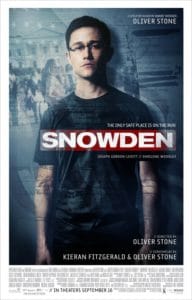 Edward Snowden is a very intelligent man, he had a very interesting government job, and he did something historic by releasing thousands of classified documents to the press. We know that going into Snowden, and that’s pretty much all we know coming out of it, too.

While it’s somewhat refreshing that noted cinematic rabble-rouser Oliver Stone focuses mostly on the man and not his famous act, there’s a disconnect between the portrait painted and the motivations for informing the American public that their government is spying on them. Contextualization is elusive as the director and co-writer (with Kieran Fitzgerald) takes us through a series of events in a perfunctory manner. Joseph Gordon-Levitt gives a steady performance – and his voice isn’t nearly as distracting as the trailers suggest, but we never get a sense of what really makes this guy tick.

To add the illusion of connective tissue and propulsion to the story, Snowden jumps around in a timeline that stretches between ’04 and the big reveal in ’13. As Snowden (Gordon-Levitt) preps to out the government from his Hong Kong hotel room with the help of a documentary filmmaker (Melissa Leo) and journalists from The Guardian (Zachary Quinto, Tom Wilkinson), we flash back to happenings of the previous decade. There’s his medical discharge from the Army, his eventual work with the NSA and CIA, and his discovery of far-reaching government spying initiatives.

They’re all pieces of an interesting life, but outside of his treasonous or patriotic acts – depending on your point of view, Snowden quite frankly isn’t a very compelling character as presented here.
The main thrust of the personal story is his rocky relationship with girlfriend Lindsay (Shailene Woodley), a free-spirited photographer who’s the yin to his conservative yang. Moving from one government post the next around the globe, their bond is tested as Snowden’s stress level rises. However, their romantic arc and personal stakes are undermined by the construction of the narrative. The couple has a nuclear fight in Tokyo that seems to affect Snowden deeply as he reflects on it. However, the very next scene is a flash forward to a few months later when he shows up on Lindsay’s doorstep and they immediately get back together. 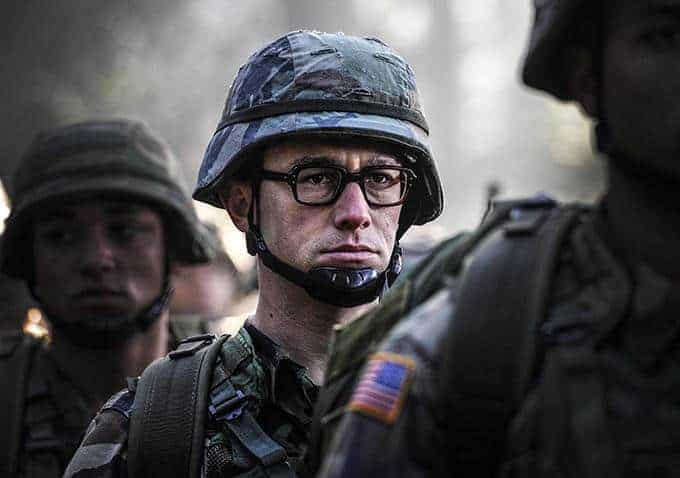 Secondary players, including Nicolas Cage and Timothy Olyphant as empty government suits and Rhys Ifans as Snowden’s recruiter and chief antagonist, add no intrigue to the espionage game.
There’s a lack of importance to every development and character; things just happen and people just exist because they must. Danger never feels imminent as the script plainly explains what’s going on at all times.

What’s more disappointing is the lack of passion from Stone. The fist-waving and finger-pointing of Born on the Fourth of July and JFK are gone, despite the fact that he clearly sides with Snowden and views him as a hero. The bald eagle soaring in the sky after the documents are released is a little much.

There’s no debate and little calling out of Big Brother, vitriol replaced with standard sound bites from Obama speeches and cable news anchors. Also missing are any artistic flourishes to distinguish Snowden as more than just a standard biopic. We get one scene of grainy footage through the documentarian’s lens and some still photos from Lindsay’s camera that tell just as much, if not more, about Snowden than the script, but otherwise the look of the movie is flat.

It also falls into common trappings of cyber thrillers. Watching files download is not suspenseful, but Snowden still tries, tossing a variety of music – from pulsating techno to classical, on the soundtrack. Predictably, it doesn’t work.

What Snowden, the man, did was a watershed moment, forcing us to weigh sacrifices that need to be made to keep us safe in a scary, interconnected world while also considering our desire for and right to privacy. Snowden, the movie, mostly sidesteps that conversation and fails to ascribe meaning to the man’s journey from golden boy government techie to pariah.
For something far more engaging (and terrifying) straight from those involved, check out Citizenfour.