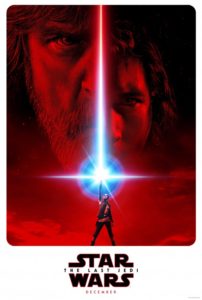 Two years ago, The Force was awakened, ushering in a new era for one of the most iconic film franchises of all time. If the rousing seventh Star Wars Episode followed the New Hope template somewhat transparently at times, it also skillfully balanced prologue with present and set the table for what was to come.

The miracle of Star Wars: The Last Jedi is its rejection of series formality. Writer/director Rian Johnson manages to honor mythology while also having fun disrupting it, leading to some refreshing swerves and genuinely humorous, smooth subversions that dovetail with the gorgeously rendered space and land battles.

It would be easy to play out the folklore by building up to obvious narrative developments and definitive answers to fanboy queries, all while surely collecting massive box office receipts, but The Last Jedi digs deeper by valuing characters and their moral significance beyond their scripted places in the legend. The digging may get a little repetitive in an overlong second act, but the exciting combat and numerous amazing moments more than make up for any sagginess.

The setup is familiar. The evil First Order is attempting to squash The Resistance, which is led by General Leia (Carrie Fisher) and brash pilot Poe Dameron (Oscar Isaac). With the band of rebels depleted and on the run, Rey (Daisy Ridley) seeks the counsel and assistance of Luke Skywalker (Mark Hamill), hoping to convince him to join the fray. And that’s all the plot you’ll get here.

Johnson sets the tone in the opening space battle that blends heroism and the highest of stakes with surprising wit. The bombing runs are thrilling, while Dameron pulls off some sweet X-wing maneuvers we haven’t seen before. He also has some fun at the expense of The First Order’s General Hux (Domhnall Gleeson), an over-the-top villain whose scenery chewing is successfully played contrary to convention throughout the film. 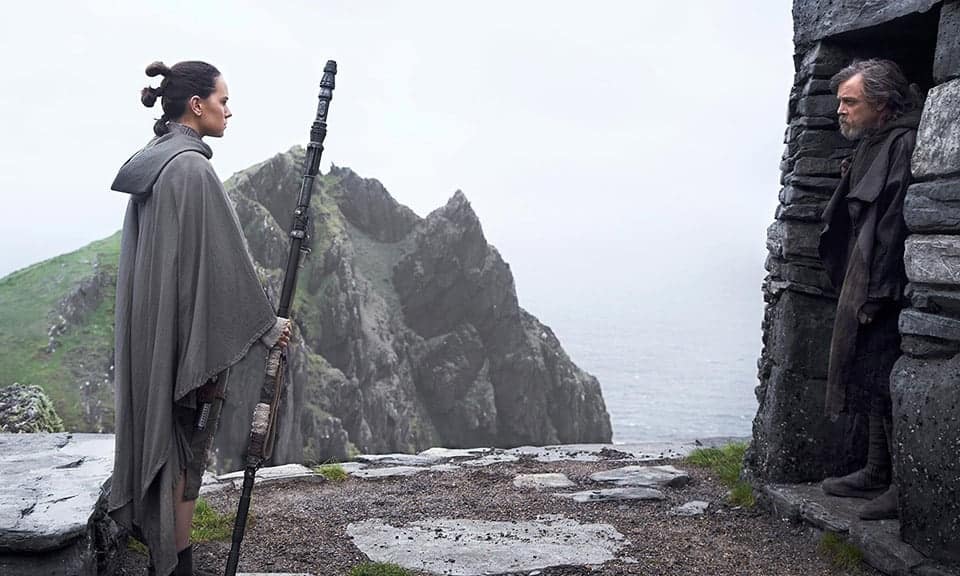 Other dastardly baddies, Supreme Leader Snoke (Andy Serkis) – a CGI creation that moves like a cartoon and doesn’t approach the believability of the actor’s avatar in the Planet of the Apes films, and Kylo Ren (Adam Driver) return as well. Their havoc-wreaking also strays from the expected.

There are several settings and characters to keep track of, and The Last Jedi juggles them all deftly, if sometimes using convenient magic propel the story. Everyone gets a moment or two – many of which will give hardcore fans goosebumps – that fit the story without feeling, for lack of a better term, forced, and most of the reveals come naturally. If anything feels extraneous, and a bit laborious, it’s the journey of Finn (John Boyega). His part in The Resistance plan is an important one, but one that’s used to comment bluntly on political and class divides. Even in a galaxy far, far away we can’t escape the horrors of our current Earthbound social climate.

Questions do linger about Luke’s self-imposed exile, which seems opposed to his Jedi Master ways. The showing of an inciting event three times in three different ways is an example of unnecessary drawn-out drama that helps pad the runtime to two-and-a-half hours, and it doesn’t fully flesh out the motivations of those involved.

Whatever issues there are with characterization and occasionally awkward editing are overcome by relationships and the representation of the spiritual aspects of the saga. Ridley once again shines as Rey, and her playful contention with Luke and serious strife with Kylo forms an interesting triumvirate. Johnson’s breezy dialogue captures the obligatory as well as the subtext. Though direct fun is poked at notion of The Force, the mythical power has its most relevant-feeling representation yet with rock-floating mixed with genuine searches for enlightenment.

All the mythos blends well with the breathtaking action, from the opening bombast to a graceful and brutal lightsaber battle with a few “wow” moments, and a final stand that for once doesn’t involve just blowing something up to neutralize a threat. Above all, The Last Jedi is simply a fun time at the movies that quenches desires to see Star Wars stalwarts, while also blazing an exciting new course.

With Disney bombarding multiplexes with new Star Wars episodes and spinoff films yearly, there’s a serious threat of staleness invading the epic as it expands. The Last Jedi avoids that pitfall beautifully, generating excitement with novel and real-yet-good-humored emotional poignancy to go along with the compelling visual and aural delights.