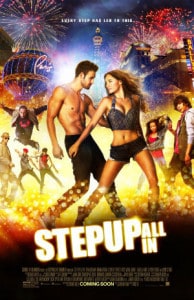 Okay, I admit. I rarely will turn town a “dance movie.” Perhaps it’s like romantic comedies for the lovelorn, shoot-em-ups for the trigger happy or car movies for the speed freaks; there’s just something about seeing the craft up on the silver screen (timed to expertly selected music and sound effects) that can highlight the form in a way really no other medium can.

But I can also admit that, with a few exceptions, dance movies are never really that good. If you know going into the theater that you’re only there for the dancing – and the dancing alone – you will probably enjoy these films. In fact, if you’re still reading this review, you will probably see Step Up: All In anyway.

All In, the fifth entry in the Step Up franchise, is yet another dance movie, featuring two sexy co-stars with a predictable and obvious love story, ridiculous “villains,” the underlying message that your crew is your family, and, yes, some incredible dancing.

All In starts out strong comedically. While I’ve fortunately never been subjected to years of waiting in long lines only to audition ad nauseam beneath terrible fluorescent lighting for tired, talentless ad execs who treat you like pliable meat that exists only to hock their next product, I now feel like I better understand it. We’re shown how the lives of professional dancers (and most likely those of actors, models, etc.) are less glamorous than we might believe.

Further poking fun at its genre and the industry itself, the filmmakers even prod dancing-reality-TV-show hosts and heartless camera crews. They both highlight with hilarity the strangeness of participating in a television competition and may be all too familiar for a few of the film’s dancers, who were actual contestants on So You Think You Can Dance in real life.

No one dancer or scene memorably really sticks out as jaw-droppingly amazing, save some insane b-boy tricks, clever caricatures/choreography, and an over-sold daring, final flip. But frankly, too much screentime was given to poorly acted relationship discussions (and I actually think Andie and Sean had the exact same conversation three times) and not enough on the dancing. I was also disappointed by the complete underutilization of Alyson Stoner’s abilities and by Briana Evigan’s dance scenes, which seemed to be trying to make her look sexy, rather than to show off her extraordinary talents.

It’s possible that I have become desensitized to these super-stylized sequences, but I hope the franchise focuses more on putting the extraordinary dancing chops on display in the future, rather than trying to pick more flamboyant costumes, cities and characters for the next one.

We want to be swept up into the scene, blown away by impossible choreography, and brought to exhilaration through the music, which is the real reason we come to see these films in the first place. Step Up simply didn’t step up to the challenge.