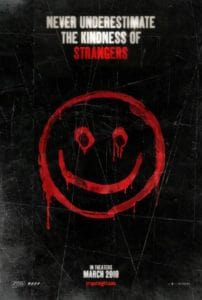 The Strangers: Prey at Night would be a much better title without the colon, but I suppose there’s branding that must be considered, even for a 10-years-later sequel. The same consideration wasn’t given to the actual film, which ditches most of what made the 2008 original work. Tension and atmosphere are replaced with bland stalk-and-slash bromides.

Characters we know very little about scream and run from masked psychos, with both the cats and the mice making several questionable decisions. Scenes meant to unnerve instead lead to head-scratching or groaning. Two separate instances of someone being trapped in a car are accidentally comedic. Prey at Night does nothing to stand out from its many (many, many) influences, directly ripping off more than a few, becoming a tedious synthesis of much better movies.

A suburban family are the lambs driving to slaughter in their minivan. Parents Cindy (Christina Hendricks) and Mike (Martin Henderson) are hauling their rebellious daughter Kinsey (Bailee Madison) off to boarding school, with her older teen brother Luke (Lewis Pullman) also in tow.  We know Kinsey is a problem child because she smokes and wears a Ramones t-shirt. 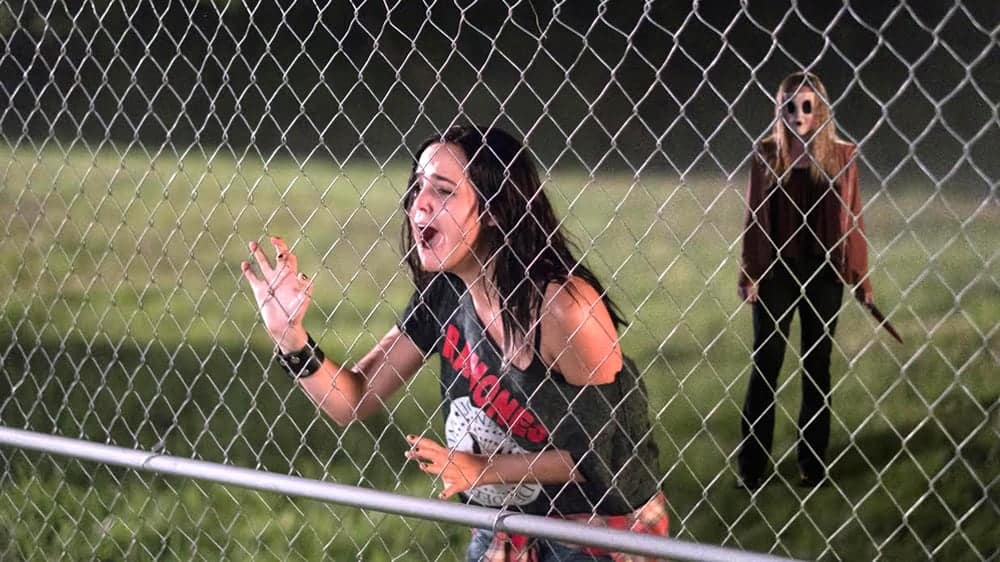 Stopping over for the night in a trailer park managed by a relative, the family gets a couple of knocks on their door from a mysterious young woman. Soon, they’re running for their lives from two girls in doll masks and a guy wearing a suit to complement the burlap sack on his head and axe in his hands. Oh, and the trailer park is otherwise completely abandoned because it’s “the off-season,” or “after Labor Day,” or something.

Where the first Strangers excelled is in the buildup. The couple being stalked had palpable stress in their relationship before the maniacs came calling and the escalation of danger was skin-crawling, utilizing stark but powerful sound design and smart composition, including one iconic shot of the bag-headed guy behind Liv Tyler, to ratchet up the intensity.

Here, the first act is just a formality to get everyone in their proper places before the carnage can begin, all of it lazily written. We assume the film takes place in the present because of the smartphones, but the filmmakers have clear affinity for the vibe of ‘70s and ‘80s horror staples. These masked killers love listening to ‘80s pop music. There’s a retro title card and a Carpenter-esque score kicks in about halfway through, but the overall somber tone fights against the film’s inspirations. There isn’t a hint of irony or fun to all the dumbness that occurs, the glee reserved for setting up ridiculous slashing scenarios. 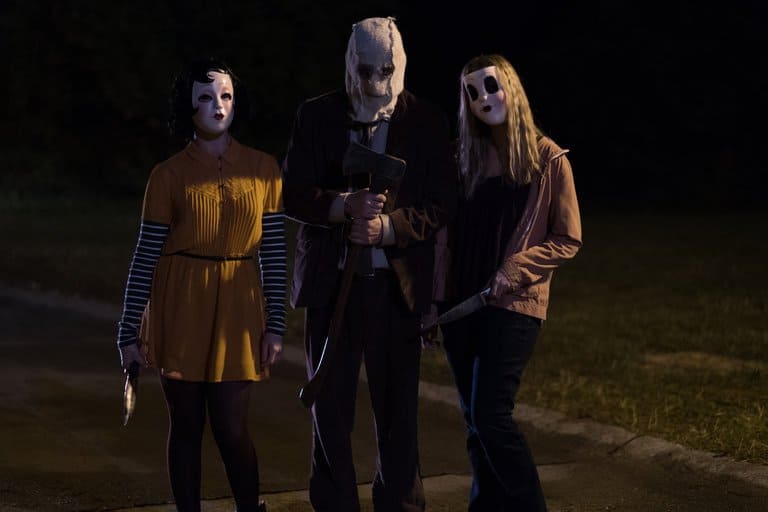 This family of four splits up on walks through the creepy trailer park filled with low laying fog, all of them, including two teenagers, leaving their cell phones behind. Whoops. Then, when in mortal danger, they come across a gun on two occasions, but also eventually leave them behind. Perhaps these, and many other, mental lapses during the chaos could be chalked up to extreme anxiety and fear. But what’s the excuse for The Strangers to do things like leave themselves open to danger, leave people for dead when they clearly aren’t, or hide in random trailers on the off chance that a victim may wander in? Psychosis, I guess.

There are a few bright spots in the dreary exercise. Madison shows the makings of a terrified but capable final girl but is often (and sometimes literally) left behind to follow less interesting characters. Director Johannes Roberts stages some visually interesting mayhem – a car crash shot from inside the vehicle is neat and a showdown at the trailer park’s pool, surrounded by neon palm trees, is a standout set piece – but every fleeting moment of intensity is undercut by nonsense that immediately follows. The clichés lay waste to a scenario and setting rife with possibilities, leaving Prey at Night a forgettable knockoff that won’t have the staying power of its predecessor or any of the genre classics it futilely copies.