How did the initial idea for Staycation come about?

I  wanted to make a ghost story where the person being haunted never fully realizes they’ve been haunted.  I feel like everyone has a story about being haunted or feeling like they were maybe haunted, and I wanted to explore that. What if that weird feeling that you shrugged off was an actual ghost that you otherwise got no confirmation of? And what would that look like for the ghost?

It’s interesting that you say that because your ghosts do not behave like traditional ghosts, in that they do not seem to want anything or interact with the corporeal world with an intention or a goal. They seem to exist concurrently with little engagement or overlap.

Yeah, I definitely leaned into that approach more for Staycation than We’ll Be Happy Over There. I think in WBHOT the ghost was more active / trying to effect the present, but in Staycation, she’s fairly resigned and used to not being able to communicate. I got a little sick of the standard ‘ghost has problems that the living need to solve’ trope and was trying to think of alternate approaches to that sort of story.

Do you see ghosts living in familiar mundanity? Like the spirit world is much like the living? Hanging about and whatnot?

This is a super interesting question, and I don’t know if I strongly believe one way or the other, or if I even firmly believe in ghosts. I definitely want to believe in ghosts, something about them makes sense to me, but if they do exist, I don’t think there’s an established hierarchy or rules system. I don’t think it’s like, Beetlejuice or anything. If anything, I’d imagine it to be a sort of long weird dream of unreality. I took that to its extreme with Staycation, where Joanna’s character is used to being a ghost, doesn’t love it, but tries to find the ‘silver lining’ and capture the memory of specific people she’s enjoyed the company of in her time at the apartment through the objects they leave behind (or she decides to keep). If that makes sense.

Staycation features Rob Malone and Joanna Arnow, both accomplished filmmakers in the own right, how did the two get involved with the project?

I actually met and discovered both of their work in roundabout ways via Nobudge. I met Joanna at the Northside Film Festival (RIP) back in 2014 after We’ll Be Happy Over There screened in the NoBudge curated shorts block and we’ve been friends ever since!  I missed her incredible ‘I hate myself :)’ during its one-day NoBudge premiere, but have since seen it several times. If you haven’t seen it, it’s on Vimeo-On-Demand, go check it out!

I had seen Rob in The Greggs, which is fucking fantastic, and a friend sent me Slackjaw by Zach Weintraub, which I also loved. We had a few mutual friends, so I tracked him down online and sent him the script, which he thankfully liked, and that was that.

Staycation isn’t the first time that a film of yours has centered around the supernatural (We’ll Be Happy Over There from 2014). What keeps you coming back to the supernatural in your films?

This is a great question and I wish I had a decent answer! I’ve always been really intrigued with the supernatural, ghost stories in particular. I’m interested in the history of places. If something happens somewhere, it will always have happened there. I like to think of ghosts as a form of time travel, almost, connecting a space through time periods.

There’s also something tragic about ghost stories that appeal to me – the idea of a moment or a feeling or a memory trapped in time, desires or fears or trauma made (im)material.

Up until this point, did you feel you’ve explored the supernatural sufficiently? Or, do you see yourself revisiting the concept over the course of your career?

It’s definitely something I’ll keep coming back to. I’m a huge horror fan, and I love conventional thrill rides for a lot of reasons, but with my shorts I’m actively trying to make a version of a ‘horror’ film that I haven’t seen before. I’ve tried to write straight drama or comedy projects but a ghost or demon of some kind keeps popping up. Too much Tales from the Crypt and Are You Afraid of the Dark? as a kid, I suppose. But I’m really drawn to the tradition of ghost stories and the heightened un-reality they bring to certain scenarios.

There’s something terrifying about that, yet at the same time, slightly reassuring – spaces containing an unseen mass of occurrences at once, but also, the accumulation of that history makes it seem worthwhile by utilizing these spaces and time.

Totally! It’s terrifying and sort of exhilarating. This is a weird story, but I have a vivid memory of house hunting in the NY suburbs with my parents when I was 10 or so. There was a house my parents really liked, and I remember walking around and having a sinking bad feeling that I couldn’t live in that place, and I pulled my mom aside and said something to the effect of “I want to leave” or “I don’t like it here”. We ended up not moving to that house, but a few months later when talking to a neighbor we learned that a schizophrenic man stabbed his mother to death in that same house.

I don’t know why your response made me think of that story, but it really shook me up and made me think differently about spaces and their histories. I think the same thing about certain objects, the way they have history / the things they’ve seen, which is what I was hoping to bring to the table with the ghost’s box of personal trinkets in Staycation.

Another aspect found in your films is violence against women (either the act, the threat of, or the aftermath). This seems to be a main component in much of your films – why and what is it that you are attempting to present and/or explore?

That actually hadn’t occurred to me but I see what you mean.  I’d say they are more about the aftermath or the reaction to the violent act, and the void the violence leaves behind. I don’t feel like I’m gendering violence, or that the violence is even the focus of the shorts.

Women-in-peril is a staple of genre films but I’ve tried to make sure violence is never the focal point, and I am very wary of ‘women in refrigerator’ tropes that flatly use one character’s trauma as a motivation for, or carte blanche justification of, another character’s actions.

I apologize for the wording, I inadvertently made it seem like a judgment/attack, that was not my intent. I should clarify that you don’t revel in that violence (you don’t even show it), but it is the catalyst for the happenings in much of your films.

I appreciate that, I didn’t take it personally! It did kinda freak me out given current climate (which is a good thing), and it also, honestly, hadn’t even occurred to me that that is a true fact about all of my films (which is also a good thing to be aware of and reckon with). But again, definitely not the focus or intent. 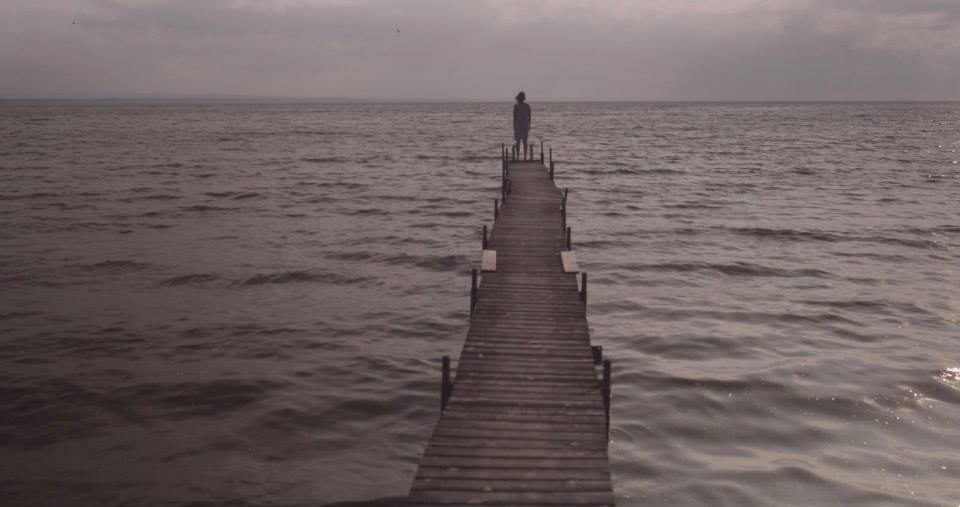 Focusing on the aftermath of said violence, does that violence directly influence the actions of the ghosts (talking Staycation and We’ll Be Happy Over There)? Perhaps, this explains their reluctance in engaging with the corporeal world? Or, if and when they do, it is done in a muted manner?

I think that’s partially true, but for me, it’s more about the permanence of that violence. The act of violence takes less than a moment, but the results can be literally forever, and I think that’s tragic and really terrifying in a lot of ways.

It seems like ever since We’ll Be Happy Over There (2014), your films have taken a slightly more playful or clever slant in execution. Was this a conscious decision on your part or something that merely came about organically?

Definitely a conscious choice to ‘lighten up’ a bit. I love really tough, feel-bad movies, and I think when I started I just wanted to make something visceral, but lately, I’ve been feeling like the world is bleak enough as it is. Not that I don’t still want to make dark weird movies, but if you can’t also laugh at the darkness, then what’s the point?

Would viewers be able to deduce your outlook based on the feel of a certain film, at a certain time? A growing darkness in the world leads to seemingly ‘’lighter’’ fare and vice versa?

HMMMMMMMM. I have to think about this more. I think worldview-wise, and this is overly simplistic, but Staycation probably comes closest to capturing how I’ve been feeling lately, which is that, even though things mostly seem dark, there are always moments of joy and lightness that you can find, if you’re looking. Even though Joanna’s character’s existence is tragic, but she’s still able to find fleeting moments of something like joy, just in being near or almost interacting with the living.

I think it also has to do with perspective – I’m wary of the overly broad ‘there’s always someone that has it worse than you’ trope, but it’s true! No matter what happens, you’re not a ghost stuck reliving your own death in the same room for the rest of time as we know it!

This wasn’t the first film of yours to premiere on NoBudge.com, what has the website meant to you and your work?

I’m going to sound like a paid sponsor but I really can’t say enough about what NoBudge has done for me. I didn’t go to film school or have any formal training or practice. I had worked on a few sets for friends, or friends of friends, and I always loved the experience, but it wasn’t until after college that I started believing that I could even feasibly make a film.

When I finally made the leap, and actually finished my first short, (Outside, 2012) no one watched it. I mean, no one. I spent way too much on festival submissions and got nothing but form-rejection letters, and it briefly felt like the short was going to go nowhere.

But then I cold-submitted to NoBudge on a friend’s recommendation, and Kentucker sent me a thoughtful note saying how much he enjoyed it and how interesting it was. Just to know that it connected with someone I didn’t know, as absurd as it sounds, made a world of difference to me.

I’ve met so many incredible friends and collaborators through the curation on that site. Kentucker has built a fantastic platform for a weird little family of movies, and I’m really honored to have been featured a few times.