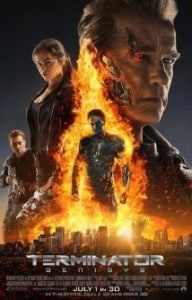 The quality of Terminator films has rapidly declined since James Cameron’s first two installments. Terminator Genisys is a bottoming-out. It’s a rat’s nest of typical time travel plot holes, garbled mythology, bland CGI action, superfluous narrative divergences, and hokey comic relief – even by Schwarzenegger standards. One may be able to pinpoint the death of the franchise as the moment when Schwarzenegger’s aged Terminator is arrested and smiles awkwardly for his mug shot while the theme from Cops plays on the soundtrack. That’s the level of inspiration on display throughout.

The framework of the plot is familiar Terminator lore. In the future war of man versus machine, the human resistance is on the brink of defeating evil A.I. Skynet. In a last ditch effort, the machine sends a Terminator back to 1984 to kill Sarah Connor (Emilia Clarke) before she gives birth to resistance leader John (Jason Clarke). As a counter measure John sends back his top lieutenant Kyle Reese (Jai Courtney) to protect his mother.

Arriving in 1984, Reese doesn’t find the mild-mannered Sarah from the original Terminator film, but the rugged soldier from T2, complete with Clarke doing a fairly broad Linda Hamilton impersonation. She’s ready to fight off the Terminator threat – including an unexplained appearance from the liquid metal T-1000 (Byung-hun Lee) – aided by a T-800 (Arnold Schwarzenegger) that’s been protecting her since she was a child. She calls him “Pops.” Seriously.

There’s potential here to turn a filmic mythos on its head in a fun way (a la Back to the Future: Part II), but instead, Terminator Genisys collapses on itself. Director Alan Taylor and writers Laeta Kalogridis and Patrick Lussier treat the opening act as a checklist of catch phrases and memorable moments – Reese’s Nikes, “come with me if you want to live,” et all. There’s so much care taken to recreate scenes from the original, the film loses sight of the big picture. If this is an alternate timeline that began back in the ‘70s, it’s likely none of this would be happening anyway. Right? 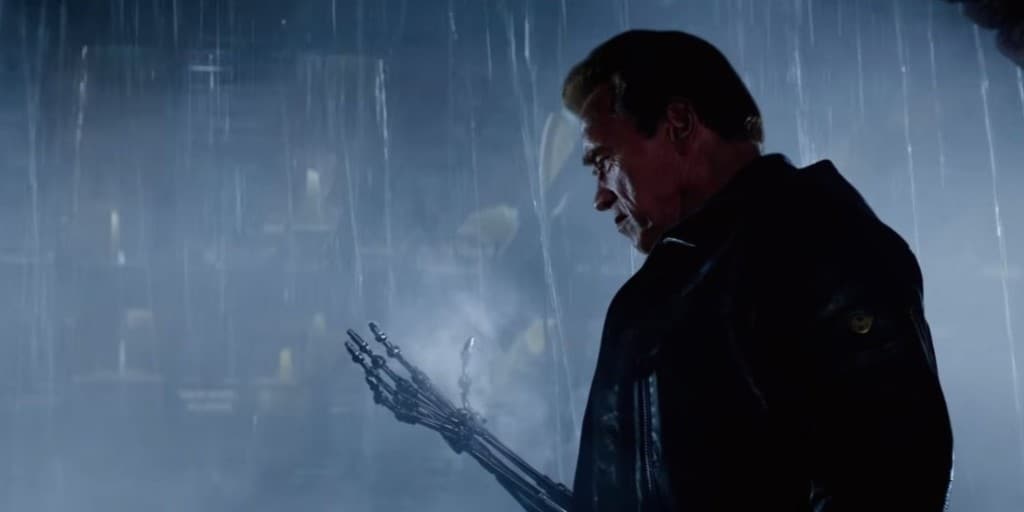 Not that it matters. Sarah and Pops have bigger plans, having built a time machine of their own and targeting a point in time to take out Skynet before it becomes self-aware and attempts to wipe out humanity. That Reese convinces them to go to yet another different point in the future to stop the launch of an operating system/app called Genisys is one example of the unnecessary layering of story. Another is the detective played by J.K. Simmons, who interacts with our protagonists in 1984 and tracks them in the future, convinced there’s a secret battle raging. His entire subplot could be excised without affecting the film at all. Again, there’s an obsession with timeline tomfoolery over coherence.

Overly complicated and full of exposition and strained witty batter between Sarah/Reese/Pops, there’s little time for concrete answers or engaging action. The idea of our constantly connected, social media crazed society leading, in part, to our demise is interesting, but never really explored. Winks and calendar corrections dominate the story, though matters regarding the future war, time travel paradoxes, potential romances, the evolution of the Genisys threat, and a new villain (spoiled in the trailers) are never untangled. Conveniently, the one question that’s addressed and never answered is: Who or what is responsible for changing everything and why and how did they/it do it? The crux of the narrative shift is ignored, likely because any potential explanation would make the film even more nonsensical than it already is.

Action doesn’t make up for the weak plotting. Watching Pops battle the 1984 Terminator is kind of neat, but everything else is old hat. A CGI helicopter crash and an oil tanker explosion could’ve been lifted from any number of other films, and nothing approaches the viscera of Cameron’s original or the groundbreaking sequences from the first sequel.

Schwarzenegger has his moments in a return to his most iconic role, the idea of an aging Terminator providing fodder for gags where faulty circuitry and creaky metallic joints double for arthritis. The rest of the cast is unable to carry the action or the intrigue. Jason Clarke and Jai Courtney are both generic soldiers, while Emilia Clarke’s toughness is conveyed through black jeans, a leather jacket, and whatever memories we bring of Linda Hamilton.

Terminator Genisys is a complete mess. It clumsily blends nostalgia with unimaginative new ideas and weird comedy with bursts of mild action, never making sense of any of it.