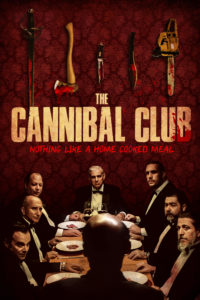 “Eat the rich” is a popular refrain amongst the proletariat but what if, before the people have nothing more to eat, the rich ate the people? Not because of a lack of food or some sort of twisted perception of thinning the population but because as a demented evolution of their apathetic ennui. That is where we find the Brazilian elite in Guto Parente’s cannibal horror-comedy, The Cannibal Club, simply eating people because it is something to do.

Married couple Otavio (Tavinho Teixeira) and Gilda (Ana Luiza Rois) have a regimen that consists of Gilda seducing and having sex with their hired hand while Otavio watches from a distance before ambushing the unknowing laborer with an axe to the skull at the point of climax resulting in a disgusting display of bodily fluids. It is an unnerving sequence of events that introduces the viewer the couple’s relationship as it becomes quite clear that they don’t really have any shared interests outside of this grisly ritual. Even while eating their employees all they seem to do is bicker, really.

It’s a simple set up and Parente doesn’t do much in deviating from the central premise. Which, for all intents and purposes, is fine except for the fact that the main characters are the wealthy elite and if there is one thing that the wealthy elite suffer from it’s the fact that, more often than not, they have boring personalities. 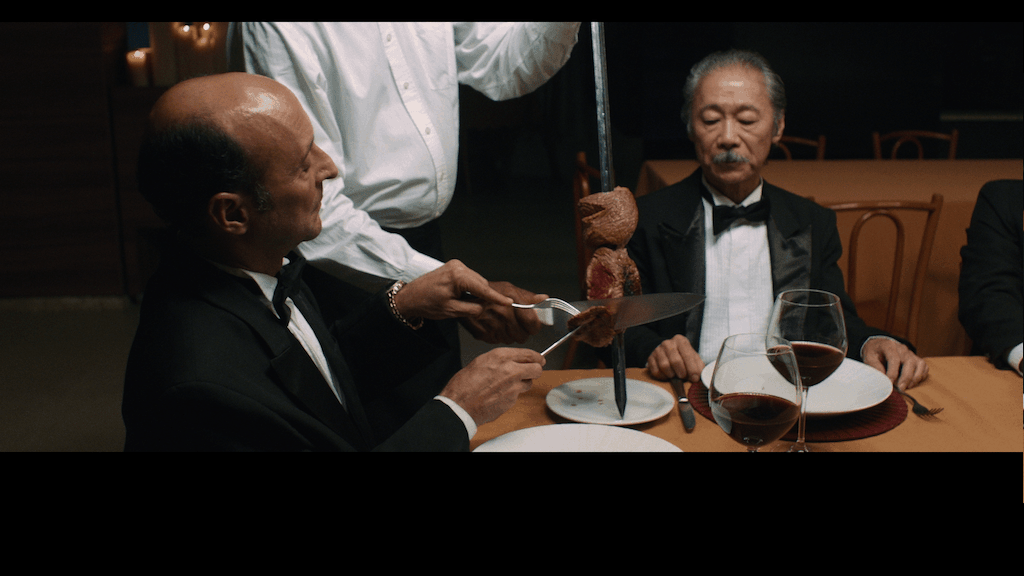 Except Otavio and Gilda’s personalities are worse than that. Theirs are nearly non-existent. Their thoughts don’t seem to extend any farther than cannibalism and sex. Obviously this is part of Parente’s comment but the act of witnessing the extent of their coupled dullness is quite the struggle. It definitely wins you over to the side of wanting the two of them to get their respective comeuppance. However, that side was probably decided early on given their cannibalistic inclinations. Their non-personalities just reiterate that desire because, maybe, once they are gone someone else, something else, more interesting will take their place.

Parente does deviate once in the form a festive celebration hosted by the congressman, Borges (Pedro Domingues), who also happens to run the cannibal club. During this fête, Gilda stumbles drunk into discovering a secret of Borges’; one that would expose him as a hypocrite and is somehow, in his twisted worldview, more damning than if the cannibalistic side of his life were to come to light.

Gilda’s discovery unleashes a conflict between the couple and Borges. It also introduces the viewer to one of the elite’s only abilities and skill which is gaslighting and outright denial. Sowing confusion in an attempt to keep things under wraps which leads to another skillset – paranoia – that Borges, Otavio, and Gilda get to occupy their time. With an absence of prey, the predators set their sights on each other.

Unfortunately, all of these developments play out in a predictable fashion as Parente never takes the initial premise beyond its base introduction. No nuance, nor layers, appear to be added to the cannibal angle stand-in for class issues in Brazil. It is all straight-forward, narratively and visually, leaving much to be desired.

As for the horror-comedy billing, not only is there nothing that I would qualify as comedy, there isn’t much that I could identify as attempts at comedy. Perhaps, the Brazilian sense of humor is lost on me in a lost-in-translation kind of way but I cannot say that there was much contained in The Cannibal Club that elicited a laugh, let alone a chortle, except for new hire Jonas (José Maria Alves) mowing a patch of lawn like he’s vacuuming a spot of carpet.

Overall, Parente’s The Cannibal Club suffers from a lack of depth. In the characters, in the narrative, in the visuals. In just about every aspect of the film the bare minimum has been deployed with the hopes that it would suffice. Nothing is expounded upon, just introduced (sometimes in a shocking manner) and resigned to a sedentary existence amongst other ideas launched and ignored.