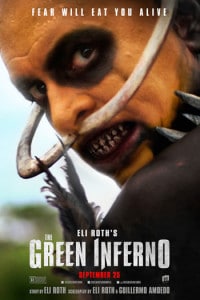 There are a couple stomach-churning moments in Eli Roth’s The Green Inferno, but probably not the ones you’d expect in a modern-day feature derived from the cannibal exploitation cinema of the ‘70s and ‘80s. After the ritualistic bloodletting begins in earnest, there’s a complete release of the tension Roth had effectively established, including an intense plane crash sequence and the initial encounter between a group of college-student activists and the South American tribe they traveled to the rainforest to protect.

Once the broadly sketched, unfortunate characters are tossed into a bamboo cage, it’s just a matter of watching them get picked off, and have their bones picked clean by hungry villagers, one by one. Whereas Cannibal Holocaust – Inferno’s most direct comparison and most obvious influence – is a terrifying and grotesque descent into a physical and psychological Amazon hell filled with still-relevant commentary, Roth’s offshoot feels like a meager attempt at both the gore and the societal observation.

Justine (Lorenza Izzo) is intrigued by charismatic campus activist Alejandro (Ariel Levy), eventually joining the hunky crusader and a group of students on a trip to Peru in an attempt to stop a construction project that will eradicate an indigenous tribe. After somehow succeeding by chaining themselves to trees and filming with their iPhones, the group’s plane crashes in the dense jungle on the return trip. The crash survivors are quickly blow-darted by the cannibalistic tribe and shepherded to their village, arriving just in time for lunch.

The anticipation and anxiety is disconcerting as the trembling, screaming college kids are petted and caressed by mobs of red-pained natives chanting and speaking in their exotic tongue. Our imaginations are running wild as the ceremonial drums throb. Then, in fairly rapid order, there’s eye gouging, tongue cutting, and dismemberment that is certainly gross, but also somewhat of an exhale. Now it’s just a matter of who comes next and what’s going to happen to them. If we were paying attention during Justine’s college lecture in the first act, we know it will probably involve tribal knives, female circumcision, and something requiring very large ants. 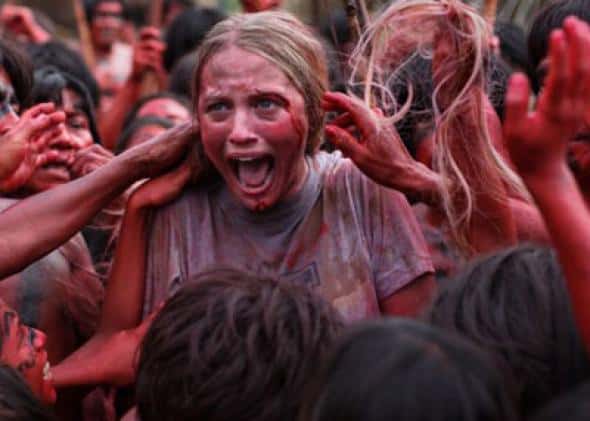 As we get deeper into the carnage, much of it appears off-screen or is implied, which, first of all, is probably necessary to maintain an R-rating, and secondly leaves us with a respite from the gore and the desperation of the situation as we are left with unconvincing reaction shots. There are several factors that zap the horror from the film. Roth’s signature playful wit prevents The Green Inferno from being truly nightmare-inducing. A juvenile handling of explosive diarrhea is lame, while a belabored setup involving getting the natives high on marijuana in an escape attempt is punctuated with a joke about munchies. Cannibals. High on weed. Munchies. Ha.

The cinematography doesn’t help either, the digital sheen making everything look too clean and less gritty than most well-produced TV horror shows. Even though a lot has been made about Roth and crew trekking deep into the rainforest and shooting on location with actual tribespeople, it looks like this could’ve been shot anywhere.

Also missing the mark is the attempt to call out the frivolity of online or on-campus do-gooding, Roth stating that slacktivism was one of his motivations for writing the script. But are you a slacker if you actually hop on tiny plane, travel downriver on a cramped wooden boat, and chain yourself to a tree in the rainforest while facing down a machine-gun wielding militia? That’s a little more than favoriting a tweet or using the social cause hashtag of the moment.

The message is consistently garbled throughout without a lot to chew on. Does it involve white privilege? Groan-worthy “who-are-the-real-savages” sentiment? All of that and more is present, but uninteresting, and plot developments involving Alejandro’s true motivations come off as forced. Most interesting is the naiveté of the students and the irony that exists with being systematically consumed by these unknown peoples they’ve blindly sworn to save. Sadly, that idea is left threadbare as The Green Inferno languishes as a collection of squishy, mismatched parts.