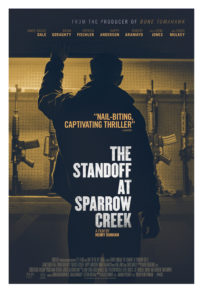 If nothing else, The Standoff at Sparrow Creek is marked by a deep sense of formal and aesthetic restraint. Set in a warehouse and framed largely in vast, dimly lit wide shots, the film takes place mostly in real time, as the seven members of a tiny militia gather after hearing word of a shooting at a nearby police officer’s funeral.

They store a staggering arsenal of weaponry in the building and fear that the investigation into the attack will blow the cover off their group. Initially acting from the same obsessive paranoia that caused them to form the organization in the first place, anxieties become real terror when it’s realized that one of their assault rifles – the same kind used in the attack – is missing and, thus, that the massacre actually was committed by one of their members.

From there, writer/director Henry Dunham, in his feature debut, focuses the action on an impromptu interrogation established by the militia, led by ex-cop Gannon (James Badge Dale), as they desperately try to figure out who was behind the violence. By investigating these men in all their irrationalities and contradictions, The Standoff at Sparrow Creek positions itself as a portrayal of imprecise but deeply held angst.

Their very membership in a militia indicates that they are bound by an unshakable belief that a time will come when they need to fend for themselves, though they can never explain what this entails. When they first meet at the warehouse, they initiate a rigid protocol to ensure that no one else knows where they are or what they’re doing.

Their actions are so well rehearsed, to the point of being routine, and their ease to intensely interrogate each other indicates that their misanthropy extends to each other. As the film progresses, it’s revealed that many of them hold further secrets regarding their identities. This plays into another overriding theme of the plot, predicated on constantly changing how we perceive the situation and the validity of the information that has been provided and paralleling the disoriented state of its characters’ minds.

As a thriller and whodunit, the movie is a solidly effective genre exercise, unified by Dunham’s steady direction, Jackson Hunt’s strikingly spare cinematography and capable performances from the cast. But the film falters when attempting to extrapolate broader conclusions that it isn’t strong enough to sustain, especially as the tensions between the group bubble over and the revelation of individual secrets during the interrogations turn into group-altering dynamics.

Dunham paints the militia’s politics (or lack thereof) as essentially syncretic, positing that their shared antipathy towards authority and social structures is sufficient rationale for them to stockpile enormous quantities of military-grade firearms. Only one member, a burly man known as Morris (Happy Anderson), is depicted as holding specific extremist views (him having ties to neo-Nazi groups), and like many of the twists throughout the movie, such information serves more as a device to catapult us further into the mysteries of this group’s actual composition than to present some context to their existence.

There are indications of potential theses on what actually brings these men together – from musings on the American gun violence epidemic at large to observations of a toxic culture of paranoid, aggressive masculinity – that are only thrown around as lip service, as if the movie is asking questions it is unduly reticent to ponder. Yet at the same time, Dunham avoids exclusive dependence on these potential pitfalls, and when taken as a whole, the film operates with relative coherence, a sign that there’s enough talent both in front of and behind the camera to keep the movie afloat on its individual successes.

The Standoff at Sparrow Creek might best serve as a primer for further deliberation. There’s something inherently interesting about a movie can sustain such a consistent minimalist quality from start to finish and deliver both remarkable highs and frustrating lows from an approach that never changes. Dunham establishes himself as a director to watch, from the strength of his visual compositions to his dynamic ability to guide his actors through the plot’s sharp turns and rapid developments.

The sum of his achievements may not completely click, but his ambition in moving us through an intensely mounted story with such a controlled style hints at a complex style that’s well worth consideration.