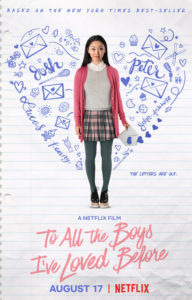 As we finally expunge the traumatic memories of The Kissing Booth from our minds, Netflix has delivered To All the Boys I’ve Loved Before, a teen comedy just as formulaic, but significantly less appalling. It benefits from a measured point of view and a winsome performance from rising actress Lana Condor in the lead role. She plays Lara Jean Covey, a suburban high school student who copes with her crushes by writing them letters. They are never sent, but rather kept for her own reference, so she can remember how even the most temporary infatuation can create overwhelming feelings. The subjects of her desire have ranged from Josh (Israel Broussard), the boy next door, to Peter (Noah Centineo), a strapping lacrosse player. Each letter is personal, passionate, and above all, private. They’re stored in a small blue hatbox, and that’s where they’re supposed to stay.

But as Lara Jean’s older sister Margot (Janel Parrish) prepares to move away for college, everything gets shuffled around in the process, and the whereabouts of hatbox are lost in the mix. Horrifyingly enough, the letters have been mailed. The revelation is pretty mortifying, but she figures out how to salvage the moment. She learns that Peter has recently broken up with his girlfriend Genevieve (Emilija Baranac), a very former friend of Lara Jean’s. She and Peter agree to form a fake relationship: a contractually obligated, purely performative bond, so they can wait for everything to blow over. They watch each other’s favorite movies and go to parties together. But it’s all for show. There’s nothing actually going on between them. They make sure they keep telling each other that. Because there’s no real attraction here. None at all. Of course. 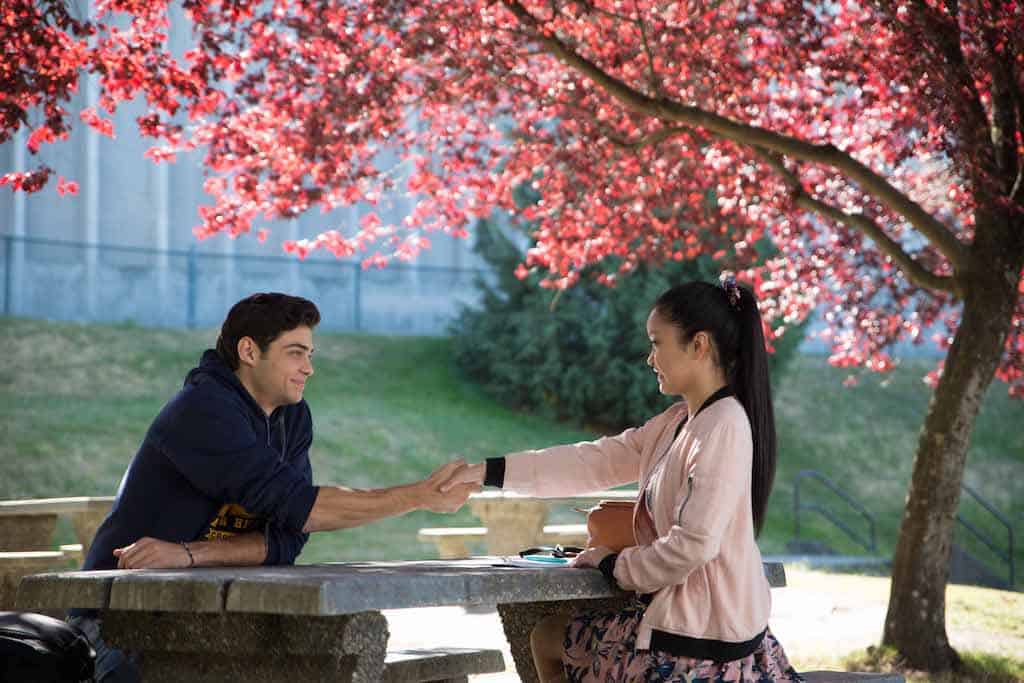 To All the Boys I’ve Loved Before knows very well where it will end up, and it knows that you know as well. Director Susan Johnson – working from a script by Sofia Alvarez, adapted from the YA novel by Jenny Han – keeps a steady hand on the proceedings. She’s fitfully straightforward, letting her actors play out every scene with a sense of space and context. Condor is a real revelation here, sliding between awkwardness and warmth and back again. Her scenes with Centineo have a fun working energy that reflects dizzying teenage romance with a refreshingly simple authenticity.

To that end, the film has a genuine respect for Lara Jean’s perspective. Her voiceover is wise but grounded, guiding the film between flashbacks and fantasy sequences that reflect her buzzing, growing mind. She is drawn with thoughtfulness and nuance. Yes, she can love Sixteen Candles, and acknowledge, as an Asian-American, that the Long Duk Dong character is a blatantly racist caricature – in the same way she can feel angst and confusion without the movie looking down on her, or go through a familiar chain of story events without becoming a generic, perfunctory device. 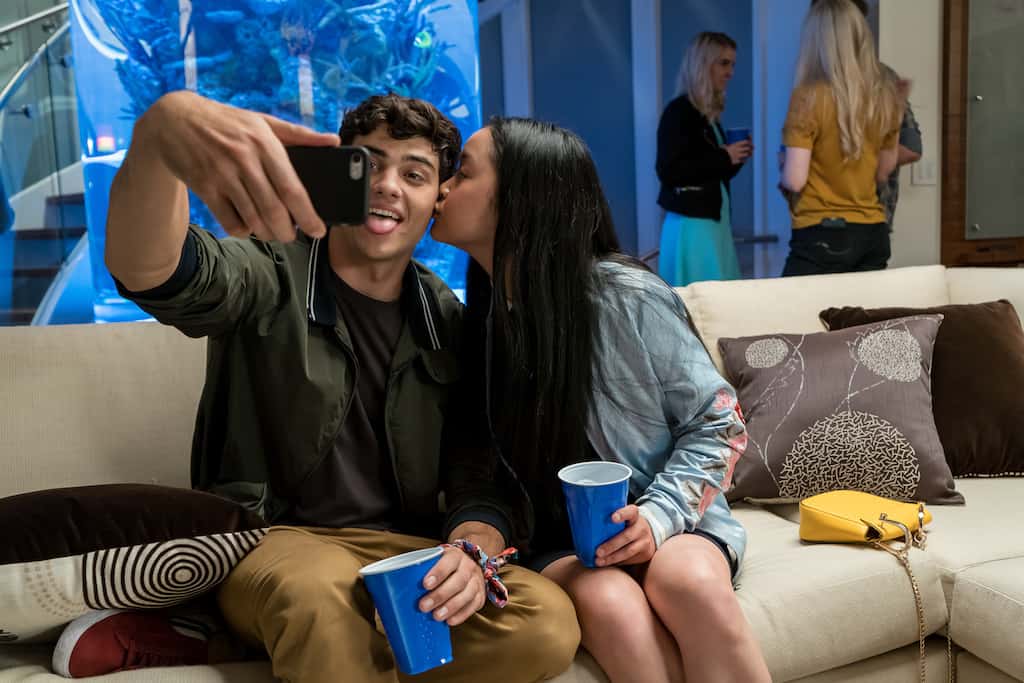 However, this effective characterization almost makes the shortcomings more painful. To All the Boys I’ve Loved Before is acutely aware of the fact that it’s based on the first book of a trilogy, and when the time comes for a sweeping, satisfying conclusion, it takes a few shortcuts and cuts to its big moments without earning the buildup. The movie relies on its actors more than ever, as a shaky third act cuts down its emotional impact when it matters the most. It’s a disappointing note to end on, and we’re left with questions that the movie hopes we forget about with the amount of time we’ve invested in these characters.

But I have to admit that it almost gets away with that hedge. There are too many good deeds done and thoughtful choices made for it to all fall apart in the home stretch, and Candor sells every implausibly neat resolution with her moving, down to earth presence. How could you stay mad? In a time when a lot of teen-targeted media is caught up with distracting, overt, and most of all wrongheaded speculation on how to connect with young audiences in the digital age, it’s refreshing to find a filmmaker like Johnson, who truly understands the value of building upon the genre’s essential, tested roots. 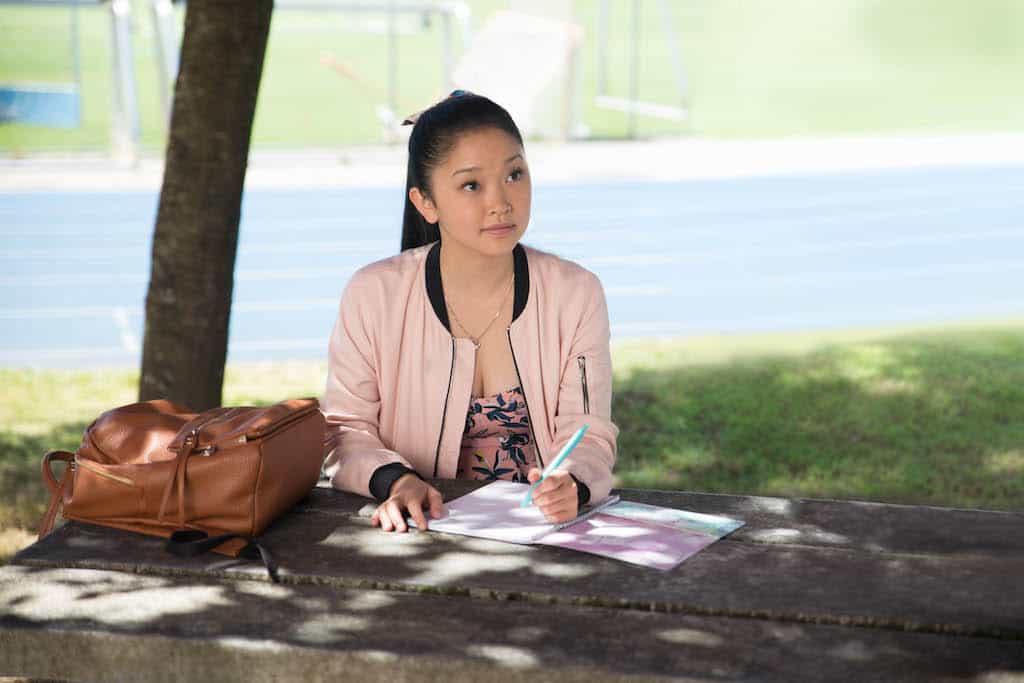 I’ve written in the past about how the John Hughes-style American high school film is a kind of movie that directly benefits from comparison and case precedent. My theory is that the very existence of such familiar elements are critical to its success, providing both fanciful nostalgia fodder for older audiences and blissful aspiration for viewers the same age as its characters. Doing it well doesn’t mean to constantly search for some hypothetical cutting edge, as it does in broader genres, but to work with the vast cultural value its tropes have attained, and take the time to develop a well-conceived approach from there. To All the Boys I’ve Loved Before never loses sight of the perspective that drew us to it in the first place. It sees the work of the past and refines its roughness, and notes the needs of the present moment. It’s funny without being cynical, and swooningly romantic without being syrupy.