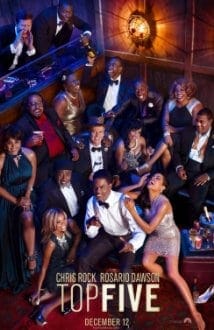 Chris Rock’s status as one of the best stand-ups of his generation, perhaps ever, isn’t in question. Thus far, however, his winning mixture of insightful social commentary and incising wit hasn’t translated to film. His previous directorial efforts (Head of State, I Think I Love My Wife) largely sacrificed the comedian’s observations for more standard slants, while his slumming with Adam Sandler in the Grown Ups movies is probably fun for them but definitely not for us. The quasi-autobiographical Top Five is the closest Rock has come yet to capturing his on-stage magic, and though the film is often funny, it’s also disorganized and broad in its judgments.

Rock plays Andre Allen, a once popular stand-up now best known for three films in which he plays a crime-fighting bear. Craving respectability, Andre embarks on a press tour for his destined-to-fail prestige picture about a Haitian slave revolution. It doesn’t help that reporters only care about his impending marriage to Kardashian-esque reality star Erica (Gabrielle Union). Shadowed by New York Times reporter Chelsea (Rosario Dawson), Andre navigates a busy day of promotion, dealing with the drama of his manufactured romantic relationship, and catching up with friends and family.

The title Top Five is derived from a running bit where Andre and others list and debate their top five rappers of all time. It suggests that Andre’s emphasis should be placed on the intensely personal things he has a real connection to, in contrast to something like his made-for-reality-TV wedding. Many of the best scenes involve Rock and the likes of Tracy Morgan, Leslie Jones, and J.B. Smoove, who plays his right-hand-man, riffing back and forth. Cedric the Entertainer is also very funny as a diamond grill-wearing, faux impresario that shows up in a flashback to Andre’s early career. Unfortunately, that section of the film is padded out and stretches a raunchy gag past the point of comedic viability and narrative necessity. It’s also completely detached from reality, as is the film as a whole.

Superfluous diversion is a common occurrence throughout. Despite some inspired exchanges between Rock and his verbal sparring partners, including a few notable cameos along with a very good Rosario Dawson, the typical rom-com structure is hard to shake. From the moment Andre and Chelsea vow to be honest with each other and share they’re each recovering alcoholics four years sober, the trajectory of their story is never in doubt.

Way too much time is spent dissecting the doomed relationship of Chelsea and current boyfriend Brad (Anders Holm), which includes an long story about placing hot sauce on (or in) a certain part of Brad’s anatomy. On Andre’s side, he’s sure to come to some epiphany regarding the relationship with his fame-focused fiancé.

Perhaps the most meta/interesting note here is that real-life Kardashian husband Kanye West is a producer of the film. There’s an implication there that talentless reality stars are open to promote themselves in whatever way possible, even if it’s exposing their own vapidity, but that’s not necessarily on-screen in Top Five. Reality TV, Tyler Perry Madea movies, and ill-conceived quests for validity as an actor are all easy targets for mockery, and Top Five takes cursory shots that get repetitive and don’t exactly reach exposé levels.

The Rock/Dawson relationship is also mostly surface-level twaddle. The two actors have good chemistry and make a lot of the hot air engaging if not always astute, but they can’t shake all the contrivances. A third act twist creates a rift, but we’re always aware of the obvious fairytale foreshadowing that exposes how this will all end.

Amid all the machinations, it’s telling that best few minutes of Top Five are when the movie stops and Andre Allen/Chris Rock owns the stage in a small comedy club. Hopefully next time around Rock the filmmaker finds a more congruent combination of stage and screen.