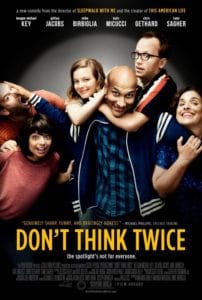 Modeled in many ways after improvisational theaters, such as The Upright Citizens Brigade and The Second City, that feed directly into Saturday Night Live, thus launching the careers of many alumni, The Commune theater is a place where friends and roommates Jack, Sam, Miles, Bill, Allison and Lindsay have forged an inseparable bond. That bond, however, is threatened when two of them are selected to audition for the SNL-like show while the others are left behind.

Starring Birbiglia, Keegan-Michael Key, Gillian Jacobs, Chris Gethard, Kate Micucci and Tami Sagher, Don’t Think Twice excels at giving the viewer a chance to see what it must feel like to have close friends who are all comedians and who are in tune with your sense of humor…and you theirs.

The film also explores the difficulty of seeing your peers move on to bigger and better opportunities while you feel left behind, feeling that you may never get your big break and thinking that it may be time to throw in the towel. It explores the resentment you feel when your friends get opportunities that belonged to you and that they didn’t really deserve, and it explores how we, consciously or otherwise, attempt to grasp onto the coattails of those on the rise to try and get our moments in the sun.

The closest analogy that comes to mind is akin to minor league ball players waiting to be “called up” to the majors, but the improv team members seem to be more reliant on one another and feed off the others’ energy, probably making it that much harder when only one or two are chosen for the show.

While it would be giving too much away to share which part of this film frustrated me the most, I will say that a pivotal plot point that was intended no doubt to serve as a demonstration of personal growth and/or self refection was utterly ridiculous and made zero sense, especially considering so much screen time was devoted to showing how these characters cared so much for each other.

All in all, this movie is rather funny, both within the improv scenes and within the inter-personal scenes. If you have ever been at all interested in the “Yes, and…” worlds from which the likes of Dan Ackroyd, Chris Farley, Jason Sudeikis, Tina Fey and Amy Poehler come, you should say yes to this one.