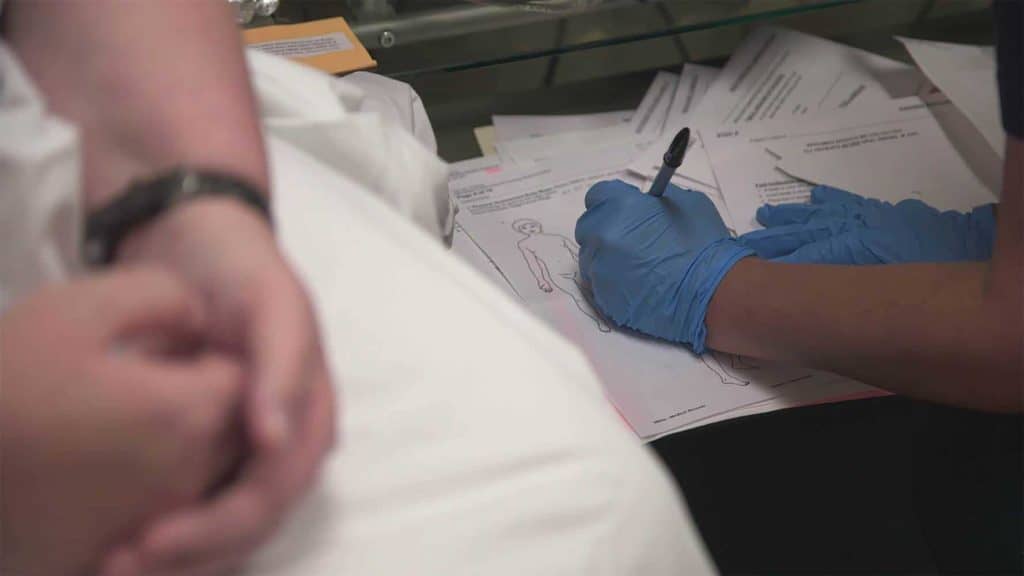 After an unthinkable crime, followed by an unimaginable and degrading test, it’s heartbreaking to think that the only evidence that could put your rapist behind bars is left to collect dust on a shelf or worse, be destroyed entirely.

Yet for thousands upon thousands of victims of rape, primarily women, who have had the ability, wherewithal and courage to endure the process of reporting the assault and then submitting their battered bodies to an invasive and often traumatizing evidence collection, this is the repeat violation.

The documentary I Am Evidence, directed by Trish Adlesic and Geeta Gandbhir, centers around the tens of thousands of rape kits across this country that sit in a backlog, going untested, because, according to various officials in law enforcement and the judicial system, there is a lack of resources available to test them, both financial and human. Others say that victims’ reports never make their way to a prosecutor because the responding officer(s) didn’t believe the victim’s story, either due to her behavior or some other perceived lack of credibility.

Yet for some, identifying and prosecuting these predators has become a personal mission, and one of those crusaders is Detroit’s Kym Worthy, who is also the current prosecutor for Wayne County, Mich. Another is one of the producers of the film, Mariska Hargitay, perhaps best known for her role as Lieutenant Olivia “Liv” Benson on Law and Order: SVU, talks about receiving thousands of letters from victims over her 15 years playing Lt. Benson on TV, a character who captures and helps to prosecute sexual offenders.

The filmmakers interview victims, advocates, scholars and many other experts to try and highlight where the legal system fails these victims. Through personal stories, archival footage, real-time criminal chasing and narration, this doc walks viewers through the baffling and maddening circumstances that surround these backlogs, especially considering the high rates at which they can identify and convict perpetrators but also exonerate the innocent.

Succinct and poignant, I Am Evidence is an important telling of a shameful side of our legal system, and one hopes that activists will continue to help make the system itself more accountable. Although it’s a comparably small number, eight states (Georgia, Colorado, Illinois, Kentucky, Texas, Pennsylvania, Ohio and New York) mandate the testing of rape kits, and more are catching on it seems. The important thing, as the film suggests, is that testing these kits has reached levels in the national dialogue that it has not in the past couple decades.