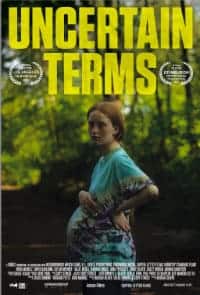 Robbie (David Dahlbom), the main character in Nathan Silver’s latest effort, Uncertain Terms, finds himself at a marital crossroad at the age of 30, retreating to the New York countryside to think things over while occupying his time with odd jobs in and around his Aunt’s estate which happens to be a group home of sorts for pregnant teens. Perhaps, not the best place for a brooding, strong-silent type like himself to be pondering the next step in his strained marriage.

The reasoning behind his strained marriage remains unknown for most of the film’s run-time; whatever it is, Silver makes it clear that it’s a major offense and the implications of which are effectively conveyed through Dahlbom’s display of internal, emotional distress. He’s wounded and vulnerable, just like the young expectant mothers residing in his Aunt’s estate which he slowly starts to interact with, specifically Nina (India Menuez), a 17 year old in a rocky relationship with her highly combustible boyfriend, Chase (Casey Drogin).

With every occupant in the house dealing with their own uncertain futures, whether it be impending pregnancies or crumbling marriages, they tend to base their decisions on emotions with little regard to reason. But surely, Robbie will remain level-headed and logical given the fact that he’s a 30 year old, married man. He does for the majority of the film but as the relationship between he and Nina evolves, through mutual confidings and late night driving lessons, the film’s direction becomes more and more unclear always keeping the viewer guessing as to where Nina and Robbie’s relationship is heading. If that isn’t enough there’s still Chase, the volatile boyfriend; Robbie’s still unresolved marital woes and the jealous plotting of another admirer in the house, rejected on her 18th birthday in a desperate plea for Robbie’s affection.

Uncertain Terms is an unassuming drama benefiting greatly from a number of quiet, yet powerful, performances saturated in authenticity. Natural and understated turns from most of the ensemble are given the space to develop organically within Silver’s improvisational framework wherein even the more stilted performances lend themselves valuable to the film’s overall feel. David Dahlbom’s aforementioned distress, his apprehensive divulging along with his ambling shifts between sensibility and emotionally motivated gut reactions drive the film. Yet, all these developments are drawn out from an affecting turn from India Menuez, who brilliantly matches Dahlbom beat for beat, albeit in a contrasting manner as the two continuously switch emotionally head-spaces throughout the film.

Nathan Silver, along with co-writers Chloe Domont and Cody Stokes, has crafted quite the relationship drama with Uncertain Terms, showcasing the triumphs and pitfalls that come along with life-changing decisions made in a wounded, vulnerable emotional state. The film definitely has its share of flaws like a shoe-horned miscarriage that is just as quickly forgotten as it was introduced and an unnecessary extended dance sequence set to Khia’s My Neck, My Back; yet, these missteps can be forgiven due to the genuine performances, the intimate camerawork provided by Stokes and a story that remains engaging and unpredictable until the end.