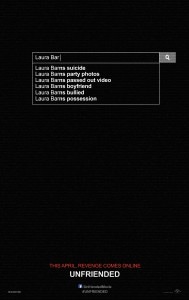 Horror films and modern technology rarely mix well. In the digital age, there’s always an explanation needed for not using tech (i.e. no cell phone service); or, the level of advancement is stretched and bastardized (i.e. fake computer programs and interfaces) to get potential victims into or out of a jam.

Unfriended keeps things simple and recognizable, the entire film unfolding on a teenager’s computer screen via tools like Skype, Spotify, and Facebook. There’s potential in the premise and a few intriguing moments, but the film’s major issue is that it’s not scary. A supernatural element clashes with the online antics, and the tension is never enough to transcend the fact that we’re constantly watching a bunch of dull, unlikable teens yelling at each other through webcams.

The computer windows we see belong to Blaire (Shelley Hennig). She helps us with some exposition by watching a couple videos showing the online shaming and subsequent suicide of classmate Laura Barns. After video chatting with boyfriend Mitch (Moses Jacob Storm) – including weird flirtations with a large knife, the couple is joined by four boisterous friends. An uninvited guest claiming to be Laura shows up, starts manipulating the chat and Blaire’s computer, and pits the friends against each other by coercing embarrassing and/or painful admissions. If the teens refuse to go along with the game, they’ll be killed. The group of six friends is whittled to five, and so on.

Considering the inherent limitations of framing all the action within a single laptop screen, director Levan Gabriadze does some interesting things to keep our attention. Blaire’s navigating of various windows draws our attention to what’s important – posts from the purported ghost of Laura on Facebook, text messages with Mitch, and a blunt message board about being contacted by the dead online. The latter has a helpful all caps note, “DO NOT ANSWER ONLINE MESSAGES FROM THE DEAD” accompanying a photo of a woman who hanged herself. When Blaire pauses to read or starts scrolling, we can’t help but follow along and gather information. 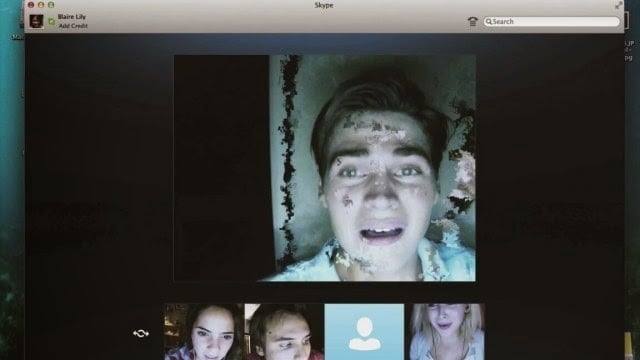 There are also some neat things done with what’s left unsaid or unseen. Blaire tells us a lot about Laura’s traumatic past with a few words that are typed, deleted, and rephrased before being sent off to Mitch. Buffering wheels on the Skype windows make us anxious about what may appear when they load. More probably could’ve been done with the Spotify playlists that make up the sparse soundtrack.

Unfortunately, the ultimate fates and explanations for the goings on are painfully uninteresting. The teens themselves often act as if the weird events are tedious. After gathering on the one-year anniversary of their classmate’s death, the friends don’t seem all that fazed when one of them appears to commit suicide and other terrible things start happening. There’s way more angst over a forced game of “Never Have I Ever,” in which there are revelations about who’s slept with who, who’s backstabbed who (in the figurative sense), and so on.

It never feels like we’re watching a progression of terror or a tightening of screws. Without a robust plot to pull us along, the computer screen gymnastics are mere novelty instead of narrative enhancement. Nothing truly taps into social media fears or the dangers of living your life online, with Unfriended favoring reality show melodrama over chilling catharsis. Instead of an engaging cautionary tale, or even an interesting twist on genre convention, we get “The Real Teenagers of Skype.” The thought of taking a spin on Chatroulette in real life is way more terrifying.