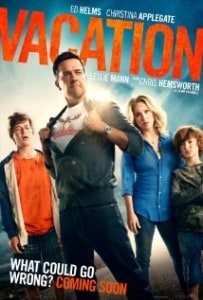 The Griswold kids from 1983’s National Lampoon’s Vacation are all grown up, but the part sequel, part reboot they inhabit more than 30 years later is an immature, witless shell of the seminal comedy. Repurposing plot points from the original and reimagining its twisted charm as a series of tasteless gags, Vacation is an insufferable experience. It goes for gross-out humor, but only understands the first part of the phrase.

Rusty (Ed Helms) has inherited the awkward dysfunction of father Clark (Chevy Chase, appearing in a cameo here), but none of his dad’s endearing qualities. He and his family – wife Debbie (Christina Applegate), sensitive older son James (Skylar Gisondo), and foul-mouthed bully Kevin (Steele Stebbins), are stuck in a typical suburban rut. Looking to reconnect with is brood, Rusty loads the troop into a weird Albanian rental car – standing in for the Wagon Queen Family Truckster – for a road trip to California theme park Walley World. I guess because it worked out so well for his family the first time.

This time around is just as disastrous, yet the trip lacks the heart of the previous film helmed by Harold Ramis and written by John Hughes. Missing the eye and ear for characters shared by Hughes and Ramis, who took recognizable personality types and cranked them up to 11, co-writer/directors John Francis Daley and Jonathan M. Goldstein get trapped between homage and an escalation of vulgar hijinks.

The best use of uncomfortable comedy comes during the opening credits, which showcase a montage of awkward family vacation photos. If that’s the tone the filmmakers are attempting to tap into, they fail miserably. Instead, characters are thrown into difficult situations that lack any relatability and are punctuated by jokes about pubic hair, sex acts, bodily functions and the like that make little to no sense in the context of their scenes. It’s an endless string of setup and belabored attempt to get to the cringe-inducing punchline. 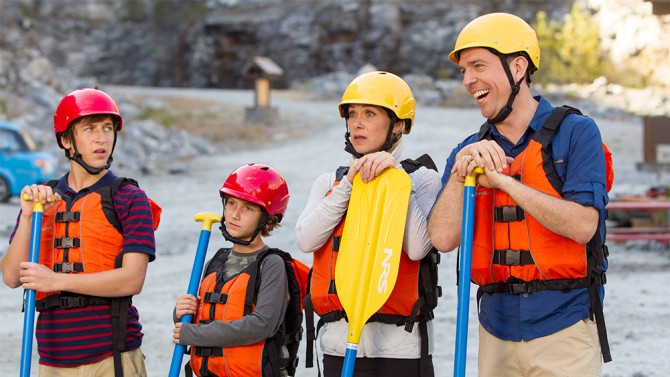 Helms and Applegate are both much better than the material they’re given and you can sense them straining to give the film some kind of oomph. Supporting players are relegated to thankless, one-dimensional roles that are varying levels of off-putting. The worst is Stebbins as Kevin. You almost feel bad for the kid as he’s being forced to spout obscenity after obscenity in the service of distaste. The act grows old quickly, especially as Kevin jokes about rape, pedophilia, and murdering his older brother. There’s no grand design to the crudeness, and it’s certainly not funny – it exists only so it can eventually end as the family discovers the trite lesson that maybe they actually do care for each other.

A string of cameo appearances provide some respite and at least give us new people to watch stumble uneasily through the terrible script. The best are Leslie Mann as Rusty’s sister Audrey and Chris Hemsworth as her studly weatherman husband, though the stopover at their Texas ranch goes on a bit too long and, of course, ends with Rusty having cow entrails hosed off of his body.

There are a couple of clever meta references to the Vacation franchise – including Rusty getting nostalgic when looking at old family photos with different actors playing the younger versions of himself and Audrey, but the winks don’t gel with the otherwise charmless tone. The most prescient observation comes from Audrey, who upon learning Rusty is “re-doing” the Walley World vacation, states, “Why would you want to do that? That’s stupid.” Indeed, in the case of Vacation circa 2015, it is.