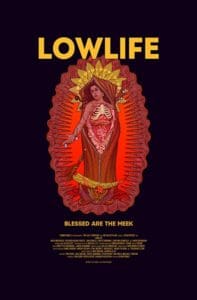 Had Ryan Prows’ Lowlife been released 20 years ago, it could’ve gotten lost in the collection of late-’90s, post-Pulp Fiction Tarantino derivations. In 2018, the energetic, violent film feels fresh and timely, despite the observable influences. It combines exploitation cinema with themes of exploitation, specifically that of immigrants and the downtrodden by the brazen and depraved, along with a blood-soaked stew of revenge and redemption. Lowlife is a wild, entertaining ride, lo-fi warts and all.

Broken up into chapters with titles like “Thugs,” “Fiends,” and a few other terms the current POTUS may use to describe certain demographics, Lowlife follows an assortment of colorful characters though a day of L.A.’s ugly underbelly. The out-of-order construct, again reminiscent of Tarantino, also serves a purpose, shifting perspectives and altering how we feel about certain events and characters — even the guy with the swastika tattoo that stretches across his entire face.

Teddy (Mark Burnham, great at being slimy), the lowest of the lowlifes, is a human trafficker who preys on the immigrant community, forcing some into prostitution and selling the organs of others on the black market. The film opens with one his henchmen, an ICE agent, rounding up migrant workers from a rundown motel operated by Crystal (Nicki Micheaux). Her reaction and desperation will make more sense the more we learn about her place in things.

She, like most everyone in the story, is stuck in an undesirable existence with little hope of escaping the stagnation. It’s probably no coincidence that a Lowe’s packing box in the motel’s office is folded just right so the company’s “Never Stop Improving” slogan is visible. 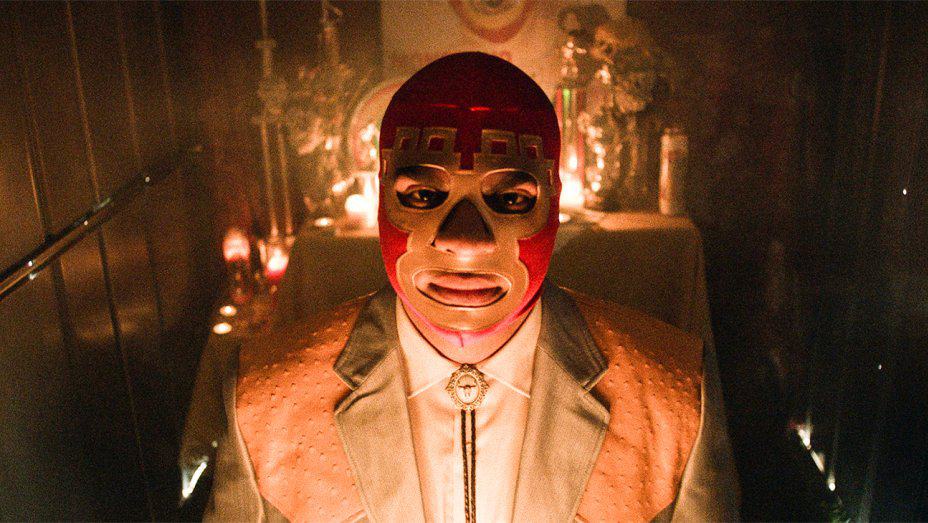 Also operating in Teddy’s brutal orbit is his son-in-law/enforcer El Monstruo (Ricardo Adam Zarate), a luchador and folk hero who never removes his mask. He hopes the son he’s about to have with wife Kaylee (Santana Dempsey) will bring more honor to the sacred Monstruo name than he has. A couple of guileless hoodlums, played by Shaye Ogbonna and Jon Oswald (he of the Swastika tattoo), get roped into a kidnapping plot involving Teddy’s family.

The mania is propulsive, moving our understanding of events forward even as the clock sometimes moves backwards. Monstruo’s introduction and arc is particularly fascinating. Established as a mythical hero, he introduces himself as a failure in a soliloquy performed for an unexpected audience. Prows often opens scenes providing somber, unpleasant information and then punctuates them with levity or surprises that work.

Zarate is scarily effective at communicating Monstruo’s wrath with his mouth and eyes through the mask. When he gets really worked up, his screams turn into a high-pitched squeal on the soundtrack and then he blacks out, waking to find the gory results of his rage. It’s a nice touch that adds to the confusion and urges us to get reoriented within the chaos.

Though we may not see every horrible thing Monstruo does, we see plenty of viscera. Occasionally, the carnage skews the tone to a dark place that seems at odds with the more charming elements of the messiness, but the punches of brutality complement the commentary about marginalized communities and the despair within them. It’s understanding through ugliness.

Observations are sometimes stilted, with dialogue that could use tightening – especially that of Ogbonna and Oswald – and performances that are uneven. But despite the blemishes, which also include some questionable practical effects, Lowlife works as a pure rush of genre film adrenaline.

Through its cobbled-together stories, the film successfully balances the hyperviolence with truthful drama, even inserting glimmers of hope into the despair. The pacing keeps us hooked; the score is a rhythmic earworm; and the pull-no-punches attitude gives the film a spontaneous swagger that’s as vicious as it is witty and observant.