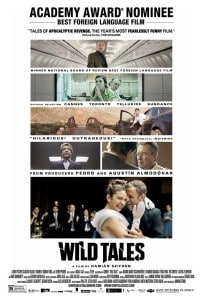 An issue that’s difficult for anthology films to overcome is one of batting average. More often than not, there’s a least one segment that doesn’t measure up to the others and regardless of the quality of the rest of the rest of the film, the weak section(s) drag it down a bit. Once the light shines on the uneven, episodic nature of the narrative, you begin to wonder how many more of these stories you have to sit through. With Wild Tales, Argentinian writer-director Damián Szifrón bats a thousand. Sure, some of the six tales of vengeance and justice are better than others, but all are tightly constructed, relatable micro-stories that tap into the foibles and fallibility of savage impulses.

The tone is set with the first vignette. A man and woman strike up a conversation on a seemingly routine flight. They find out they have a history with the same man. Another passenger overhears and chimes in that she also knows the man, and then another. Turns out everyone on board has had a contentious past with this man. The flight doesn’t end well.

Under the opening credits is a series of still photos depicting wild animals known for being territorial predators. Then we get into some of the worst of human nature, which can be just as marauding. A waitress contemplates poisoning the man that ripped her family apart years earlier. A businessman and a yokel battle in a back-and-forth game of escalating road rage. An engineer who oversees controlled demolitions loses control when he believes he’s wronged by unjust government policies. A rich family attempts to cover up their son’s deadly hit-and-run accident, while the spouse of the victim vows revenge. Finally, the longest story occurs at a wedding reception with a bridge and groom in turmoil after it’s revealed he’s cheating on her.

It’s fitting that Wild Tales ends with a totally wacky anti-celebration. The capper is full of tears, blood, screaming, and conniving, concluding in a way that ensures the comedy of painful errors will continue. Though each story has a finite ending – certainly definitive for some of the more unfortunate characters – they each communicate the perpetuity of one misguided choice having consequences that lead to another poor decision, and so on.

Both of the men trading barbs and blows on the isolated highway had opportunities to drive away, but couldn’t deal with being insulted. The engineer could’ve paid his fines and the rest of his life may not have fallen apart. He may have some measure of consolation and personal satisfaction in the end, but was it really worth it to stand up to the establishment? Corruption between the wealthy family and attorneys on both sides of the hit-and-run case creates rifts, but in the final analysis social privilege shows its advantage over the other, less fortunate pawns in the game. All of the societal conundrums are inflammatory in their insightfulness.

Beyond the thematic delights, Szifrón’s execution is always engaging. Stories flow together well and are all beautifully shot, each with a distinct feel. There is some commonality – in several of the segments, a camera is placed on a door as it swings open, for example – but the underlying humor and horror are the real ties that bind.  There’s no clunky framing story needed to fasten everything together; our knowledge of human nature, and the dreadful examples we see, hear, and read about every day are more than enough.