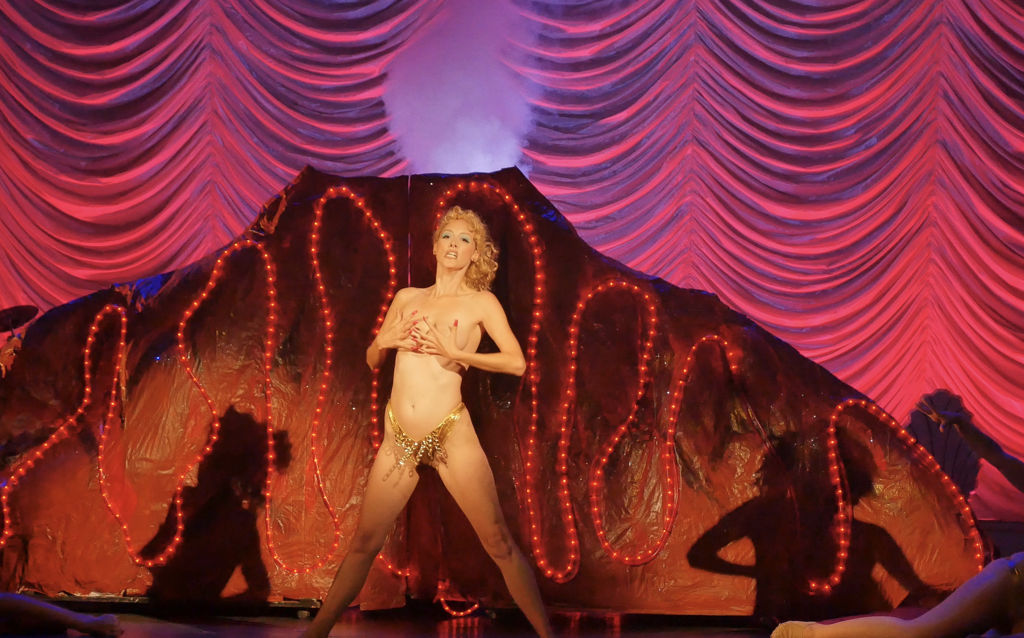 Paul Verhoeven’s Showgirls has been a topic of film discussion for pretty much its entire existence, from the hype leading up to its release in 1995 to the glee with which it was torn to pieces as it failed critically and commercially, and then the debate over whether it is considered a “good movie” that has ensued ever since.

Jeffrey McHale’s documentary You Don’t Nomi assumes that its viewers are broadly aware of the film’s history, the resurgence it received as a cult classic, and the argument that it deserves its recent reconsideration as a key work within Verhoeven’s career (in which it is usually marked as a satire so sharp that most people missed its actual intentions). The documentary looks to parse through the varying readings of the film but even more so focuses on how each of its interview subjects – from the critics who reviewed it upon release to the individuals whose devotion to the film has led to them writing entire books about it– have come to have the relationship with it they do.

That McHale never interviews them on camera and instead plays their comments as a voiceover to a wide array of clips, gives the project something of a tightly narrated, video-essay-like feel. But it’s less about composing a particular synthesis from these disparate perspectives and more of a musing on the perspectives themselves and how one film seems to evoke and stand for so much.

There is, indeed, something to be said about the multifaceted, all-cylinders approach taken. McHale digs through Verhoeven’s filmography, drawing parallels and comparisons that sometimes make You Don’t Nomi seem more like a primer for the filmmaker writ large. The documentary’s greatest strengths and weakest links can sometimes feel like two sides of the same coin.

An effort to examine as much as possible, from as many voices as possible, makes for a fascinating survey at times but also occasionally feels disparate and cluttered. It takes a longer analysis to come away with the big picture here. But again, to McHale’s credit, it’s a well-reasoned one.

Showgirls, the movie supposes, is the kind of work that has fostered so much debate, derision, and praise – or perhaps something that elides these superlatives altogether. One such perspective is a compelling story from April Kidwell, the actor who portrayed Nomi Malone in a tribute musical, on what playing the role meant to her personally: that it is better to evaluate the film on the level of its impact in totality than to evaluate the work “as it is,” or rather, as it was received at the time.

Flops come and go all the time. It is only the select few that remain, even as a punchline, and fewer still that seem to occupy a cultural space all their own. But because of its wide range and disinterest in picking one angle to hone in on, You Don’t Nomi explores its subject matter in a way that may seem apparent to those who are already familiar with the content of its overall arc, putting it in a somewhat awkward position when one considers that those unaware might not be very interested in the film at all.

Certainly no one familiar with Showgirls has not thought about the double meaning of the main character’s name (“Nomi,” referenced in the title), but it is evaluated at length all the same. And the well-known nature of the film’s infamous reception in 1995 is also probably discussed more than is necessary, especially considering that McHale’s contextualizing of Verhoeven, and to some extent screenwriter Joe Eszterhas’s, careers leading up to Showgirls is a more interesting pursuit.

This is an impeccably well-made documentary from a technical perspective – its integration of film clips, voiceover, and archival footage is almost always smooth and precise. Its shortcomings are structural, with an unfocused approach that can confuse more than inform or entertain. But the underlying intent, and much of the filmmaking ability on display at least, goes a long way in making for a fascinating thesis on how Showgirls exists in pop culture. Though flawed, it’s a clearly passionate and well-reasoned examination of the many factors that surround this one movie, which not going anywhere any time soon.