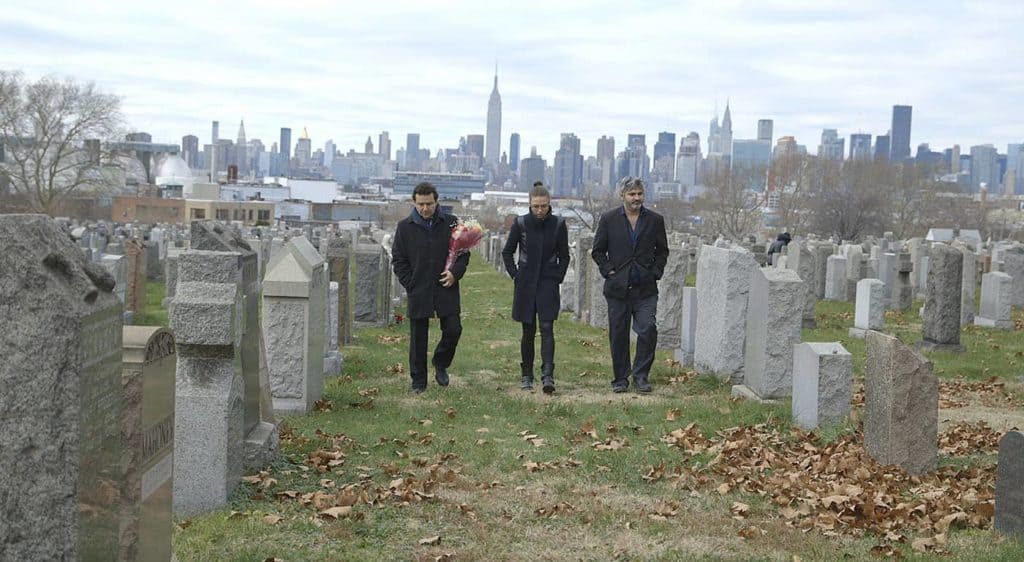 That’s a question you might ask yourself early on while watching Applesauce, the latest from writer/director Onur Tukel as it serves as the jumping off point for his tried and true brand of acerbic comedy. And, if you’re familiar with Tukel’s propensity to play rather unlikeable, yet somehow appealing, characters you might ask yourself “how in the world is Tukel playing a high school teacher?” Furthermore, what class demands him to teach these kids about empathy?

Yet, that’s exactly what Tukel’s character is and does, attempting to impart wisdom on the subject of empathy by discussing 9/11 and US involvement with Iran, obviously with disastrous results; he plays high school teacher Ron Welz, a long-time listener, first-time caller of the Stevie Bricks (Dylan Baker) radio show to answer the question – what’s the worst thing you’ve ever done?

With the call-in also being an absolute failure, Ron opts to recount his tale of regret in the company of his wife, Nicki (Trieste Kelly Dunn), and their couple friends, Kate and Les (Jennifer Prediger and Max Casella), while out to dinner. His impassioned play-by-play of the appalling deed sets off a chain reaction of confessionals and reprisals amongst the group furthering the trend of disastrous results, spreading it out into everyone’s lives. Not to mention that someone is now terrorizing Ray with severed body parts (some delivered, some strategically placed).

Although the tone of Applesauce routinely dips its toes into the darker waters with the script’s sharp turns into the macabre, as appendages present themselves at random, Tukel’s brand of comedy always remains at the forefront. A dialogue-centric comedy, where tangents abound, consisting of a steady stream of throwaway gems, most during flippant discussions of important subjects, nonchalant offensiveness shrouded in obliviousness or detailed breakdowns of the most trivial topics.

Tukel’s strong script, seamlessly shifting between a well-balanced mixture of genre elements, is amplified by the performances from the four principal cast members. The banter and bickering game between everyone is top-notch as tempers flare from infidelities, pissed-upon puppies and other, various annoyances.

The portions of Onur Tukel playing a high school teacher alone would make for a highly-amusing film; his pseudo-intellectual scholar-wannabe waxing wise on a number of contentious subjects appears to conjure his viewpoints on the spot, without much thought. Which is humorous considering the immense amount of thought and concern he dedicates to the trivial; treatises addressing the desperation in exchanging the words I love you, among others.

Tukel’s latest effort is his most polished film to date, accompanied by a lively, jaunty jazz score that keeps the proceedings light and carefree, even when it detours into more weighty territories. It also further proves the theory that anything involving Jennifer Prediger and Onur Tukel will result in, nothing less than, an enjoyable time.

Be sure to click here to check out all of our Tribeca 2015 coverage.